SEOUL, May 4 (Yonhap) -- South Korea has confirmed 97 more cases of contagious variants of the new coronavirus, adding to concerns that the country's virus battle may be exacerbated by the more transmissible viruses.

The Korea Disease Control and Prevention Agency (KDCA) said 75 case were local infections and 22 imported cases, bringing the total to 632.

Of them, 87 cases were the Britain-originated variant, followed by 10 from South Africa, according to the KDCA. 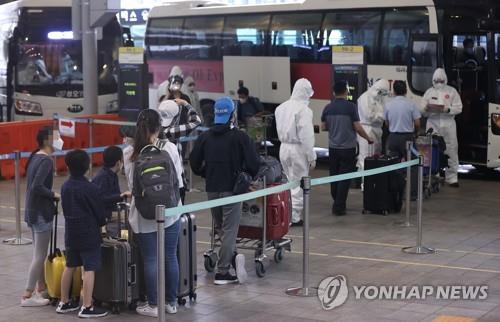 The authorities have said they remain vigilant against the possibility that highly transmissible new variants from Britain, South Africa and Brazil could lead to another uptick in virus cases here.

The number of "emerging" variant cases totaled 473, according to the health authorities.

The number of variants believed to have originated from virus-hit India reached 33 here.

The recent emergence of several COVID-19 mutations has complicated the global fight against the pandemic because they are more transmissible than the original one.

South Korea has banned passenger flights arriving from Britain since Dec. 23 to block the new virus variant that was first identified in Britain. The country, however, lifted a ban on direct flights from Britain on a limited basis for the convenience of Korean residents living in the European nation.

In order to block the inflow of a new emerging strain from India, entrants from the country will be mandatorily quarantined at state facilities for seven days before being put under self-quarantine depending on the results of virus tests, starting from earlier in the day.

India has been a virus hotspot in recent months, with a COVID-19 variant strain also posing a problem. The country has reported around 300,000 new coronavirus cases per day for over a week.