SEOUL, May 5 (Yonhap) -- South Korea's agriculture ministry said Wednesday it has confirmed an African swine fever (ASF) case, marking the first one of the highly contagious and deadly animal disease in seven months.

According to the ministry, pigs at a farm in Gangwon Province were infected with the deadly animal disease, prompting the authorities to cull 401 animals, according to the Ministry of Agriculture, Food and Rural Affairs. 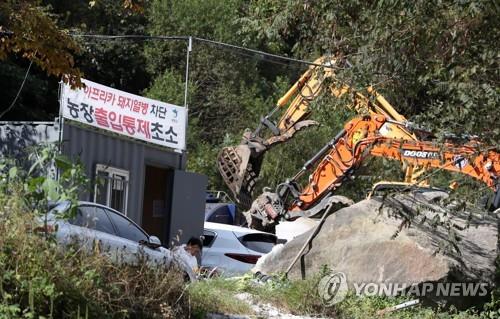 In 2019, ASF swept through pig farms in northern regions covering Gyeonggi and Gangwon provinces, prompting authorities to cull about 400,000 pigs nationwide as part of preventive measures. A total of 14 farms were infected.

Although no new ASF cases had been reported from local farms, the virus was prevailing among wild boars, which can potentially infect domestic pigs through contact.

More than 780 cases of ASF from wild boars from the border areas, leading the authorities to cull more than 3,000 wild boars.