LONDON/SEOUL, May 5 (Yonhap) -- Foreign Minister Chung Eui-yong and his Japanese counterpart, Toshimitsu Motegi, agreed on the need to develop relations between their countries in a "future-oriented" manner during their first talks in London since Chung's inauguration in February, his office said.

Their talks on the margins of a Group of Seven (G-7) gathering followed a trilateral meeting with U.S. Secretary of State Antony Blinken, amid Washington's efforts to encourage its Asian allies to move past their historical enmity to face shared challenges, such as North Korea's nuclear and missile threats.

Until recently, Chung and Motegi had no communication as relations between Seoul and Tokyo remain strained amid tensions over Japan's wartime forced labor, sexual slavery, export curbs and its recent decision to discharge radioactive water from the crippled Fukushima nuclear power plant.

"The two ministers shared the understanding of the need for South Korea and Japan to closely cooperate for peace and prosperity in Northeast Asia and the World," the ministry said in a press release.

"And they shared the view that the two countries should develop relations between Seoul and Tokyo in a future-oriented manner," it added.

The two ministers also agreed to continue cooperation to make substantive progress in the efforts for complete denuclearization and establishment of lasting peace on the Korean Peninsula.

Despite what a Seoul official described as a "good atmosphere," the talks appear to have underscored stark differences on historical issues as well as the plan to dispose of tritium-laced water from the Fukushima plant.

Chung expressed "deep concerns" that Tokyo made the decision on the planned wastewater release without sufficient prior consultation with neighboring countries, the ministry said.

On the historical issues, Chung stressed that they cannot be resolved without Japan's "correct" historical perception. 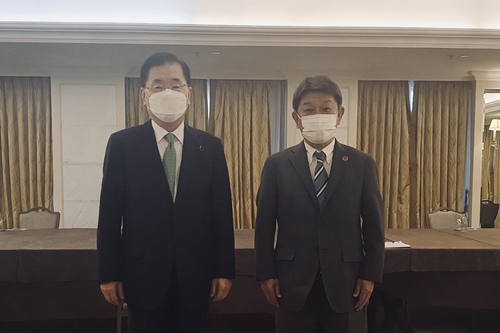 At the talks, Motegi demanded South Korea take appropriate measures on the wartime sexual slavery issue and offer solutions to the forced labor issue, according to Japan's Kyodo News.

Tokyo has repeatedly made the demand, arguing that the sexual slavery issue was already settled under a 2015 government-to-government deal, while the forced labor issue was addressed under a 1965 state-to-state pact that normalized bilateral ties.

Despite the gaps laid bare at the talks, the first meeting between the top diplomats raised cautious hope for reconciliation.

After his talks with Motegi, Chung said, "I had good talks."

During the talks, Chung expressed his will to strengthen communication with Tokyo on various pending issues, and Motegi fully shared the view, a Seoul official said.

"The talks proceeded in a good atmosphere, and this served as an opportunity for the earnest start of communication between the two countries," the official said.

The two countries held their last foreign ministerial meeting in Germany in February last year, when then Minister Kang Kyung-wha held talks with Motegi and her then U.S. counterpart, Mike Pompeo.