SEOUL, May 6 (Yonhap) -- The cost of insuring South Korea's sovereign debt against default fell to the lowest level this week since the 2008-09 global financial crisis as the country's economy is recovering faster from the pandemic, the finance ministry said Thursday.

The spread on credit default swaps (CDSs) for South Korea's 5-year dollar-denominated currency stabilization bonds came in at 19 basis points Wednesday, according to the Ministry of Economy and Finance.

It marked the lowest since April 2007, when the country's CDS premium hit a record low of 14 basis points.

A basis point is 0.01 percentage points. The spread on CDSs reflects the cost of hedging credit risks on corporate or sovereign debt.

The reading marked the 17th-lowest level globally and also the lowest among emerging countries, according to the ministry.

The country's CDS premium rose to 57 basis points in late March last year, hit by the fallout of the COVID-19 pandemic. But since then, the spread has fallen fast amid an accelerating economic recovery. 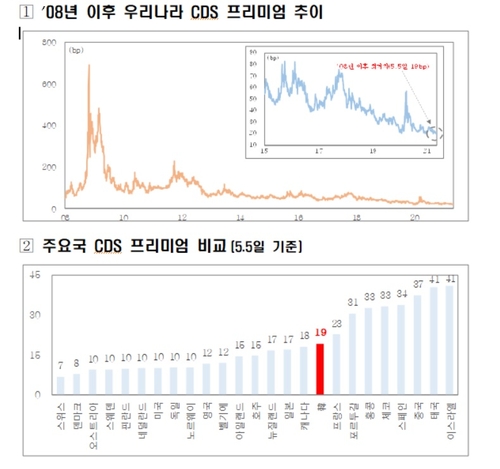 The Korean economy grew 1.6 percent in the first quarter from three months earlier, accelerating from a 1.2 percent on-quarter gain in the fourth quarter of last year, according to the Bank of Korea (BOK).

The country posted a current account surplus for the 10th straight month in February on the back of brisk overseas shipments. Its foreign exchange reserves amounted to a record high of US$452.3 billion in April, the world's ninth-largest size.

Foreign investors snapped up a net $8.35 billion worth of local bonds in March, extending a net inflow of their bond funds for the third straight month, according to central bank data.