SEOUL, May 6 (Yonhap) -- Twelve South Korean women who were forced into wartime sexual slavery by Japan filed an appeal Thursday after a court dismissed their claim to compensation from the Japanese government, activists said.

The women were among the 20 plaintiffs who sued the Japanese government for damages in December 2016 in connection with its forced recruitment of women to work at front-line brothels for Japanese soldiers during World War II.

The Seoul Central District Court dropped the case on April 21, citing the principle of "sovereign immunity," a legal doctrine that gives a state immunity from a civil suit in foreign courts.

Lee Yong-soo, one of the most outspoken victims, and 11 others filed the appeal with the same court, according to the Minbyun Lawyers for a Democratic Society and a support group for the victims. 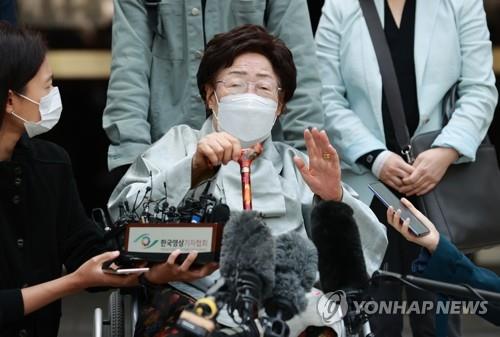 "The court ruling blocked the rights to a trial for victims of crimes against humanity and distorted their positions regarding the 2015 agreement between South Korea and Japan," the groups said, referring to a government-to-government deal that aimed to settle their dispute over the sexual slavery issue.

The victims, who were euphemistically called "comfort women," have long claimed that the agreement was reached without their approval.

"We will hold (Japan) responsible for committing crimes against humanity," the groups said. "We will stand with the victims until their human rights and dignity are restored and justice is served."

The ruling came as a shock as it came only months after the court ruled in favor of a separate group of 12 victims in January, ordering Tokyo to make reparations of 100 million won (US$88,000) to each victim. Japan has not complied with the ruling.

Historians say that around 200,000 Asian women, mostly Koreans, were forcibly sent to front-line brothels to provide sex services for Japanese soldiers during the war.