SEOUL, May 7 (Yonhap) -- "Grandma, you're not a real grandma," Soon-ja's grandson David nags in the poignant immigration film "Minari."

Both on the shoots and in real life, the 73-year-old veteran may be far from your ordinary Korean grandmother. But it's exactly why she has emerged as the country's favorite grandma.

Youn declares she doesn't admire Hollywood and responds that she's "not a dog" to a reporter asking her a question about what Brad Pitt smells like. She stylishly matches a bomber with her evening gown while not forgetting to pay tribute to the late British Prince Philip and thank her younger colleagues. 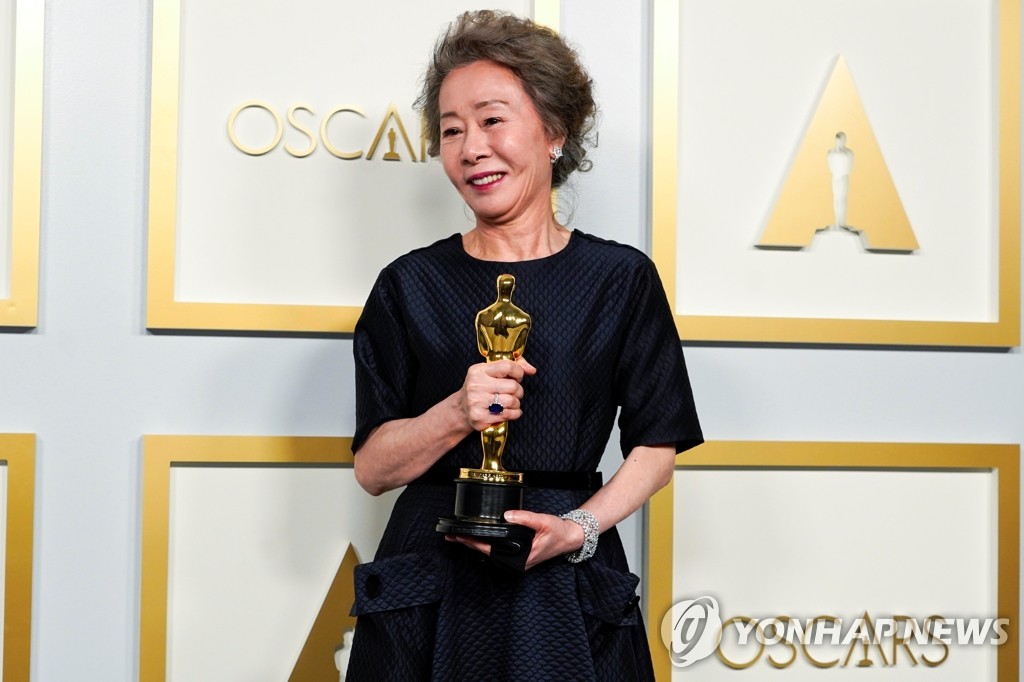 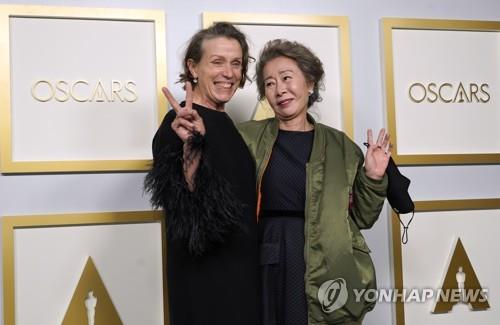 At home, the advertising industry has been quick to jump on her growing fandom. Companies whose key customers are in their 20s and 30s -- a beer brewer, an online fashion platform and a mobile operator -- have picked the silver screen star as the new face of their marketing campaigns.

In the fashion platform ad, she confidently remarks, "Even if your outfit is weird, does it go against law? ... Live as you wish," while she calls an artificial intelligence robot a "good boy" in the mobile operator's ads promoting the latest computing technologies.

But Youn is not the only grandmother that has stolen the hearts of young Koreans.

From fashion guru Chang Myung-sook -- better known by her nickname Milanonna, which comes from the Italian city Milano and the Italian word meaning grandmother -- to YouTuber Park Mak-rye, a legion of hip grandmas has emerged as role models for the country's younger generation.

Apart from winning an Oscar or having a lifelong career in their respective fields, these women take on new challenges, teach life hacks like cooking the perfect boiled egg or find good deals at budget fashion brands and give genuine advice on life.

Some of the most popular videos on Milanonna's YouTube channel, which has amassed more than 800,000 in less than two years, shows her going through her daily morning and nighttime routines. As one of the first Koreans to have studied in Milano and worked in the fashion business for decades, she teaches viewers how to pronounce Italian brands and pick durable items.

Park Mak-rye's ascent is more dramatic. Park, named the "last one" after being born as the youngest among seven siblings and spent most of her life toiling for her family, turned to YouTube thanks to her granddaughter who quit work after hearing Park is prone to dementia. The two traveled to Australia, where they filmed clips that marked the beginning of Park's YouTube career.

The rest is history. With her down-to-earth personality and openness toward the latest trends, Park has become one of the country's most influential YouTubers with more than 1.3 million subscribers. In 2019, she even invited YouTube CEO Susan Wojcicki on her channel and sat down for a chitchat and a Korean cooking lesson. 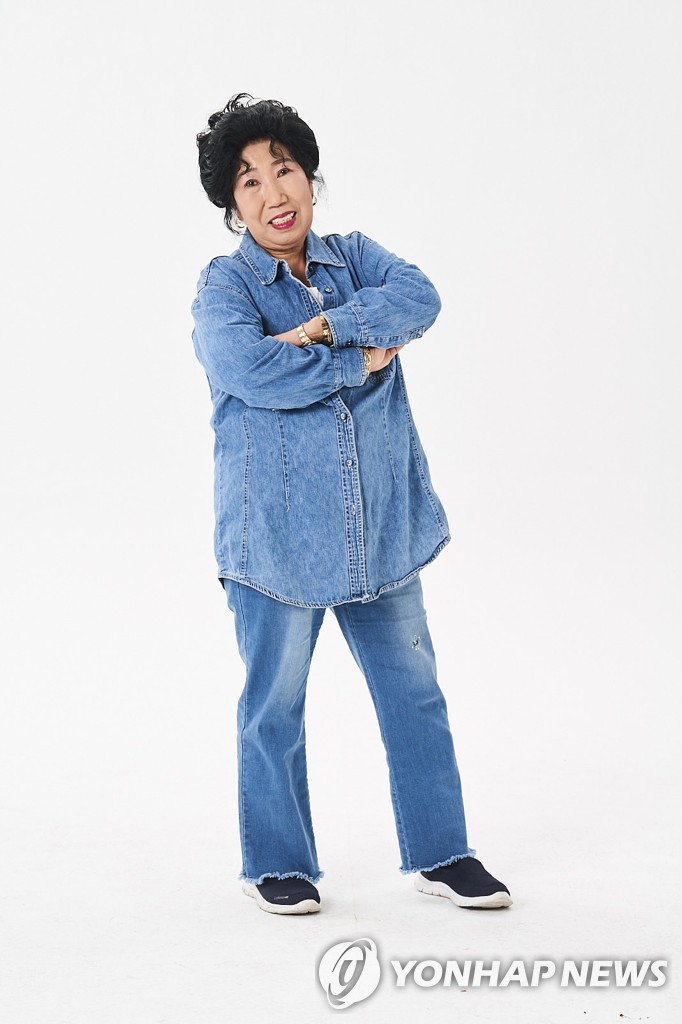 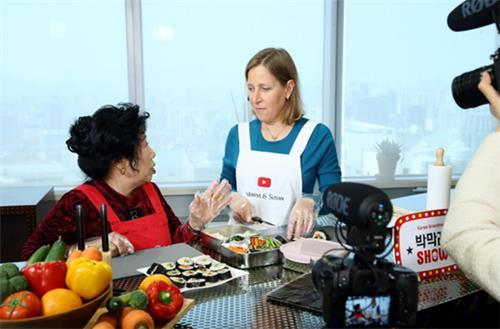 But what really sets them apart is their attitude toward life and the advice they give based on the ups and downs they've gone through, according to their fans who say they want to age like these women.

"It's unfair to compare her with other old people since she's a celebrity, but I thought she was so cool and amazing even before the Oscars spotlight," said a 30-something office worker who works in the automotive industry and is a self-proclaimed fan of Youn.

"Going against the conservative social atmosphere as a single mom and taking on new challenges even after establishing a stable and successful career is something that I really look up to. ... I want to follow in her footsteps," said the fan surnamed Chang, saying she wants to also stay in the workforce for a long time while developing her career.

Others note how their presence is a breath of fresh air in a country where the derogatory term "ggondae" is trending. The term, which can refer to people of various ages but is mostly reserved for older people, defines those with bossy and authoritarian attitudes like the English word "boomer."

In contrast to the ggondae stereotypes, Youn, Chang and Park are noted for being open to the younger generation and instead encouraging them that it's OK to take it easy in the country's cutthroat competition for better schools and jobs.

"I don't like the word 'best.' ... Can't we all be in the middle and coexist?" Youn told a Korean reporter when asked if winning the Oscars was the best moment in her life. 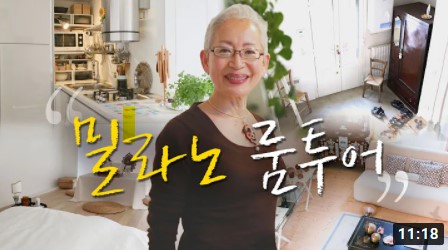 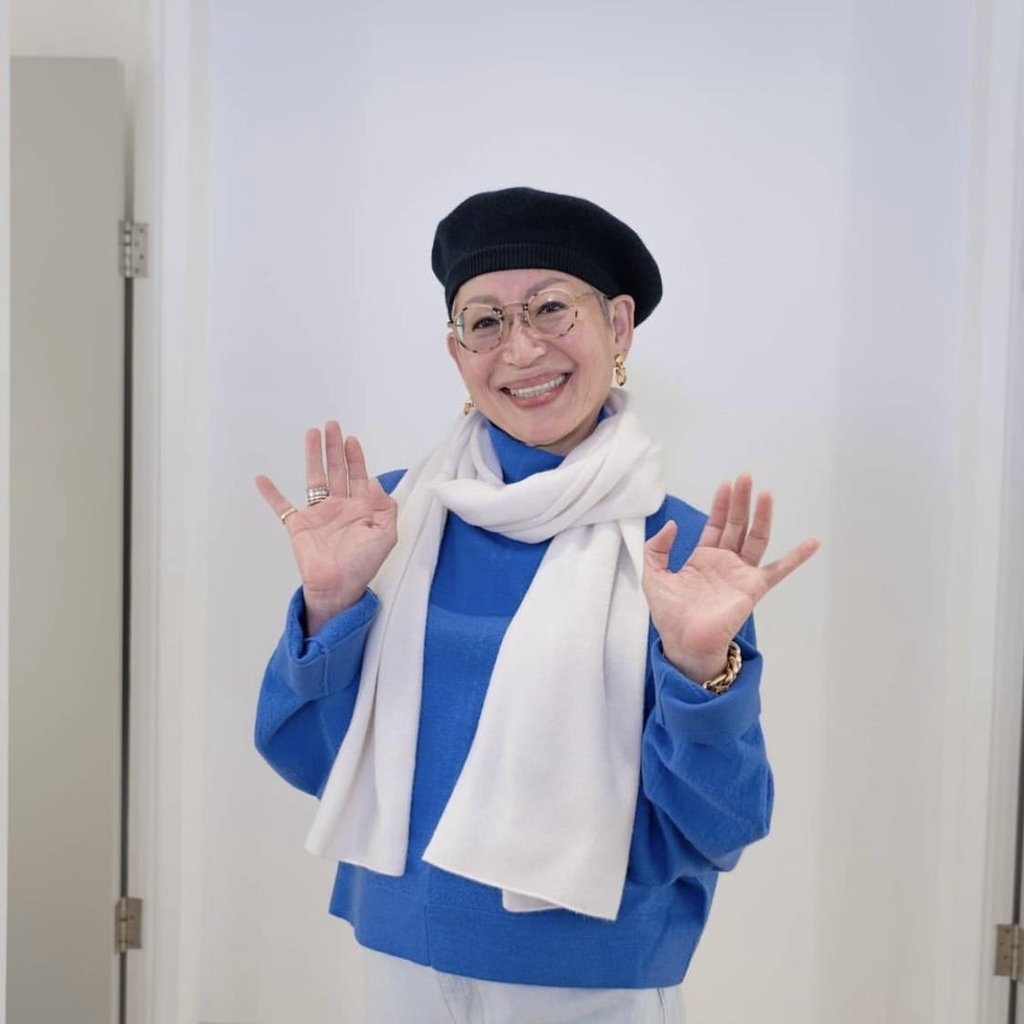 They've also charmed their younger fans by not viewing age as an advantage.

In a 2018 episode of the SBS reality show "All the Butlers," Youn stressed that being older doesn't make someone wiser.

"I can be me, and you can be you. It doesn't mean there's something to learn (from me) since I'm older."

"Old people shouldn't try to be treated well by younger people. Being treated well is something that has to come from them, it's not something you can get because you want to," said Chang, who calls her viewers her "amici," or friends in Italian.

"These woman share messages with an attitude that treats us as equals. They don't speak in a dominant or condescending manner or boast of their accomplishments," said a 35-year-old IT marketer surnamed Hwang, who regularly watches Milanonna's videos.

"They are not the typical Korean grandmas who are warm and tough and spent their lives only focusing on their children. ... To me, Milanonna feels more like a smart, big sister who has a great taste for life."

Critics say their genuine attitude that speaks from the heart is what has resonated the most.

"The younger generation is interested in fairness. Even when getting advice, they want something that really comes from experience. In this sense, (these women) share messages in a fun, witty and genuine way," culture critic Kim Heon-sik said.

"Some say we don't have adults to look up to in this society. (These women) have shown how respectable adults should be and how they should interact with their younger peers."