SEOUL, May 6 (Yonhap) -- President Moon Jae-in said Thursday that the government will provide full support for a project to build the world's largest floating wind farm off the coast of Ulsan.

If constructed, it is expected to open the future of South Korea as an energy powerhouse, he said during a visit to the city, 410 kilometers southeast of Seoul.

"It's important from now on," Moon said after receiving a briefing on the scheme to create a 6GW floating offshore wind power complex by 2030.

The capacity is equivalent to power generated by six old-type reactors for use by 5.7 million households. It would lead to a reduction of 9.3 million tons of carbon emissions a year, Moon said. South Korea is aiming to go carbon neutral by 2050. 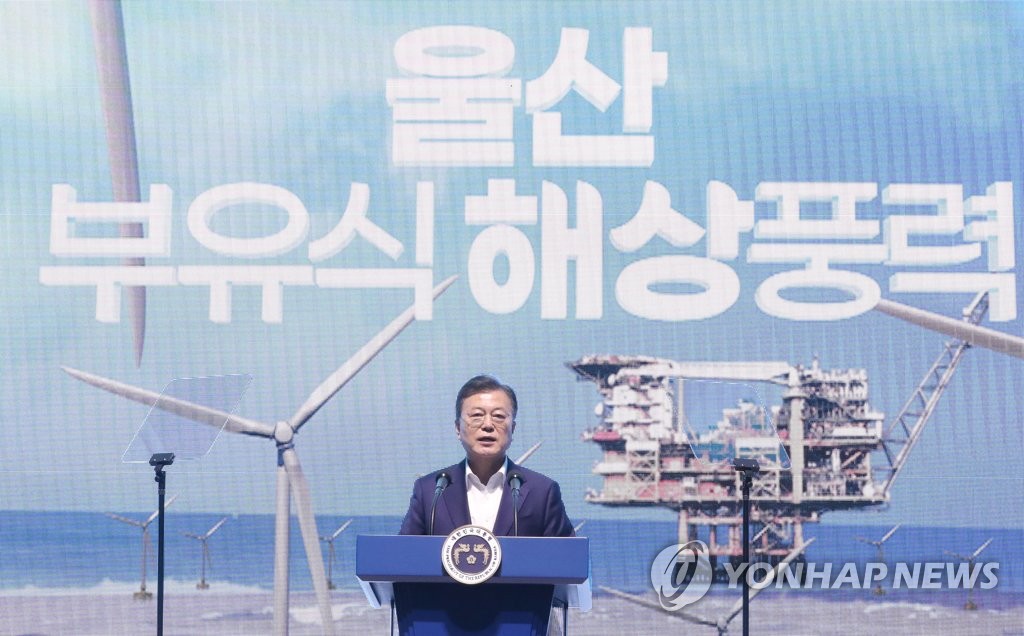 The president asked all participating parties to make concerted efforts for the success of the project, noting that it involves not just Ulsan city authorities and related government ministries, but also domestic and foreign firms, research institutes and colleges.

A total of 36 trillion won (US$32 billion) would be invested in government-private partnerships into the project to create the facilities in what used to be a natural gas field in the East Sea, according to Moon.

"The government will take the lead first," Moon said in a speech. In the first stage, the public and the private sectors plan to pour 1.4 trillion won into the work by 2025.

He pointed out the advantages of such a floating offshore wind farm, which can be installed offshore to make use of strong winds with less inconvenience for residents.

"Above all, it produces electricity most reliably among renewable energy sources," Moon said.

The envisioned wind farm in Ulsan would pave the way for the city, once called the industrial capital of the country in a "fossil fuel era," to emerge as that in a "clean energy era," Moon said.