SEOUL, May 7 (Yonhap) -- A former senior prosecutor was sentenced to three years in prison Friday for taking bribes in connection with a financial fraud scandal involving Lime Asset Management.

Yun Gap-geun, former chief of the Daegu High Prosecutors Office, was arrested in December on charges of accepting 220 million won (US$196,250) in kickbacks from a real estate developer financed by the hedge fund in 2019.

Lee Jong-pil, former vice president of Lime, allegedly requested Yun, then a lawyer and opposition party official, use his influence and persuade Woori Bank to resume selling its product that had been suspended amid allegations of Lime's financial irregularities.

The Seoul Southern District Court convicted Yun of accepting bribes through good offices. It handed down a sentence of three years in prison and ordered him to forfeit the same amount as the bribe, as requested by the prosecution.

The court said Yun requested the sale during a meeting with Woori Bank's chief executive, though he knew it could cause massive losses to individual investors. 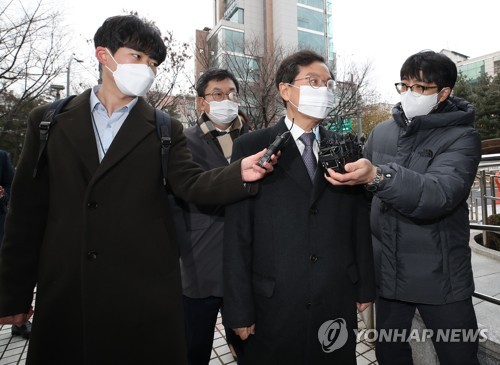 The court dismissed Yun's claim that the money he was paid was legal consulting fees and had nothing to do with the scandal.

The court noted his contract with the developer did not specify the period of service and the amount of money was far more than usual legal advice fees.

The investigation into Yun began when Kim Bong-hyun, a key suspect in the fraud case, claimed in a letter from prison in October that he paid hundreds of millions of won to a lawyer and opposition politician who was a senior prosecutor and lobbied Woori Bank's top executives.

Kim, former chairman of Star Mobility, known as the financial source for Lime, was arrested in April 2020 and is on trial on charges of embezzlement and bribery.

Lee was sentenced to 15 years in prison in January for deceiving investors by concealing the massive loss incurred by the company's fraudulent fund product. Former Lime CEO Won Jong-jun was also imprisoned for three years.

The prosecution began investigating Lime in early 2020 over its alleged cover-up of massive losses and subsequent suspension of fund redemption worth an estimated 1.6 trillion won.

The case has developed into a high-profile lobbying scandal, involving former and incumbent government officials and politicians.
(END)