SEOUL, May 7 (Yonhap) -- Almost all of South Korea was shrouded Friday by a yellow dust storm originating from the Gobi Desert in northern China and Mongolia, the state weather agency said, with a fine dust advisory issued for Seoul and central western regions. 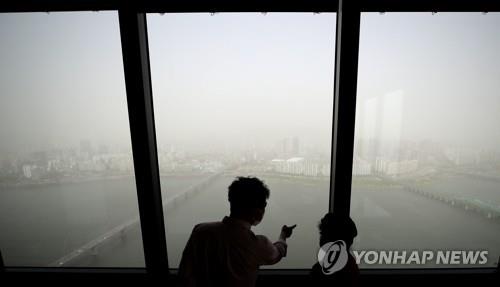 The average hourly concentration of fine dust particles smaller than 10 micrometers in diameter, known as PM 10, rose to 321 micrograms per cubic meter in Seoul on Friday afternoon, 352 micrograms in Gyeonggi Province and 371 micrograms in South Chungcheong, the KMA said.

A fine dust advisory is issued when the PM 10 figure stays above 150 micrograms for longer than two hours.

The state-run Air Quality Forecasting Center said the latest yellow storm is expected to spread to almost all other parts of South Korea in the afternoon and affect the entire nation until Sunday.

The density of PM 10 dust is expected to soar to "very bad" levels later in the day in the capital area, the central provinces of Gangwon and Chungcheong, the southwestern province of North Jeolla and the southwestern city Gwangju, and "bad" levels in other regions. 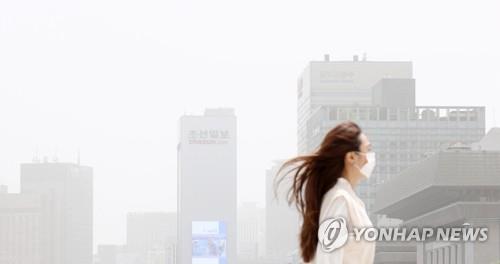 On Saturday, the PM 10 density will remain at the "very bad" level in the capital, Chungcheong and Jeolla provinces and the southern resort island of Jeju, the center said.

In a related move, the Ministry of Environment said the lowest level of "attention" in the government's four-stage crisis alert against yellow dust was enforced for Seoul and nine other metropolitan cities and provinces as of 11 a.m.

The yellow dust "attention" level is enforced when the daily PM 10 average is expected to stay above 150 micrograms.