Net profit for the three months that ended in March fell to 11.9 billion won (US$10.6 million) from 79.5 billion won a year earlier, the company said in a regulatory filing.

"The COVID-19 pandemic drove down passenger jet parts orders (from Airbus and Boeing Co.) and affected possible deals to export aircrafts," a company spokeswoman said over the phone. 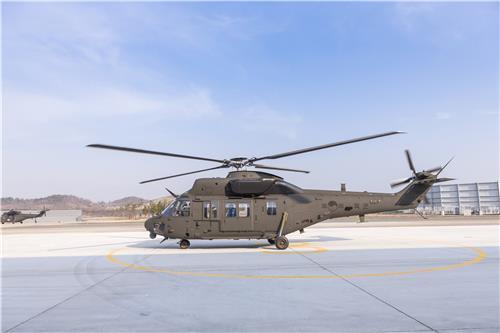 KAI used to win deals to manufacture wing and body parts for passenger jets made by Airbus and Boeing, but the deals have dried up since early last year due the coronavirus pandemic.

As for capital expenditures, the company said it will spend 2.2 trillion won on facilities, research and development activities and stake investments in companies with advanced technologies for five years through 2025.

KAI has set a goal of 5 trillion won in sales in 2025 helped by improving parts orders from the world's two biggest aircraft companies and possible exports of the FA-50 trainer jet and the Surion (KUH-1) transport utility helicopter.