SEOUL, May 7 (Yonhap) -- The evolving U.S.-led Quad forum is neither a security alliance nor an Asian version of the North Atlantic Treaty Organization (NATO), a U.S. White House official said Friday, stressing it is an open framework designed to tackle shared challenges.

Edgard Kagan, senior director for East Asia and Oceania at the National Security Council, made the remarks in a virtual seminar, amid a sense that the Quad, which consists of the United States, Australia, India and Japan, aims to counter the rise of China, making South Korea and other countries reluctant to join.

"I think it's also worth noting that it's important to keep in mind ... this is not a security alliance. It is not an Asian NATO," Kagan said in the webinar hosted by the local think tank Chey Institute for Advanced Studies.

"It is not something that has very clear governance structures. And so it offers a very flexible framework," he added. 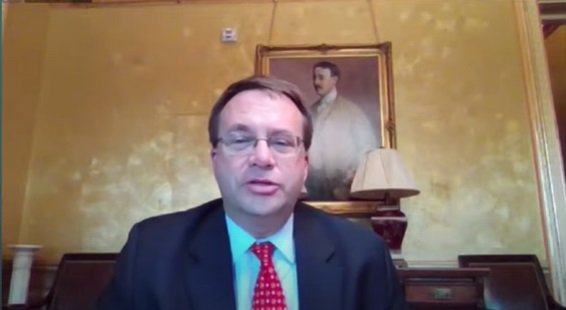 His comment came amid expectations that the U.S. would encourage South Korea, a key Asian ally, to join an expanded version of the Quad forum, with Seoul apparently mindful of potential negative reactions from China.

Seoul has maintained that it is willing to cooperate with the Quad member countries on an issue-by-issue basis, and that it can join any architecture as long as it operates under the principles of openness, inclusiveness and transparency.

Observers said that the issue of South Korea's participation in the Quad could be brought up when President Moon Jae-in holds his first in-person summit with his U.S. counterpart, Joe Biden, in Washington on May 21.

Noting a "great deal of interest" about the Quad in Korea, Kagan stressed that there are many "opportunities" that would arise if Seoul works together in the Quad framework.

"What we see is very much opportunities, opportunities to further expand areas of cooperation for countries that have common interests," he said. "We see this as something that will require discussion and we look forward to being part of that discussion."

Asked whether China can be part of Quad activities related to transnational challenges, such as climate change, Kagan stressed that the forum is "based on the idea of a free and open Indo-Pacific" -- a vision that Washington believes has been undermined by an assertive China.

"It's hard to imagine countries participating in activities that didn't sign on to the idea of a free and open Indo-Pacific free of coercion, free of intimidation, free of economic retaliation or economic threats," he said.

In the webinar, Michael Green of the Center for Strategic and International Studies said he does not anticipate expansion of the Quad, as it would get the forum "slower and more cumbersome."

Noting Korea's interest in the Quad agenda, such as maritime security and supply chain management, Green said that the question is not whether Korea should join the Quad or not.

"You know it's which part of the agenda, on an a la carte basis, will Korea join, as other countries -- Canada, Britain, France -- join in different aspects of the Quad," he said.