SEOUL, May 7 (Yonhap) -- Prosecutors on Friday demanded imprisonment of 25 years for a woman from Gumi, southeastern South Korea, on charges of abandoning a 3-year-old girl in an empty house and causing her death.

The 22-year-old woman surnamed Kim was arrested on Feb. 11 after the corpse of the 3-year-old was discovered the previous day at her home in a multiunit house in Gumi, 260 kilometers southeast of Seoul.

Kim was accused of abandoning the child, leading to her death, after she moved out of her home last August to remarry.

In the court hearing held at the branch of the Daegu District Court in Gimcheon, near Gumi, prosecutors said Kim deserves stern punishment for inflicting unimaginable pain on the 29-month-old child who died on a hot summer day without taking a sip of water. 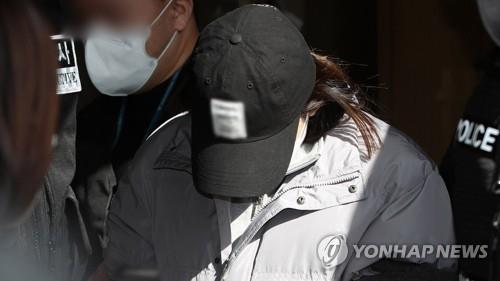 In response, Kim offered an apology over her crime and said she will accept any punishment from the court. The sentencing hearing is slated for June 4.

At first, the dead girl was believed to be Kim's daughter, but she was later found to be her younger sister.

The case took a bizarre twist in early March, when it was discovered through DNA tests that Kim's 48-year-old mother surnamed Seok, who lived on a different floor of the same multiunit house, is the biological mother of the dead girl.

Prosecutors and police suspect that Kim and Seok each gave birth to baby girls around the same time, and the elder woman may have switched the babies so her baby would be raised by her adult daughter. They have yet to discover the whereabouts of Kim's missing daughter, let alone whether she is alive or dead, in the face of stubborn denials by Seok.

Seok has also been indicted on charges of attempting to abandon the body of her 3-year-old daughter in February and abducting her granddaughter of the same age years ago.