SEOUL, May 10 (Yonhap) -- President Moon Jae-in on Monday agreed to modify some of his real estate policies, calling them a main reason for voters' "severe punishment" for his party in recent local by-elections.

"(My government) has failed to achieve the aim of stabilizing property prices and (the party) received a severe punishment for that," Moon said during a press conference at Cheong Wa Dae held to mark the fourth anniversary of his inauguration.

He picked the real estate problem when asked by a reporter what was the most "most regrettable" policy failure in the past four years.

Moon's policy failures to curb runaway housing prices have been blamed for the ruling Democratic Party's crushing defeat in the April 7 Seoul and Busan mayoral by-elections, a key barometer of voter sentiment ahead of next year's presidential election. 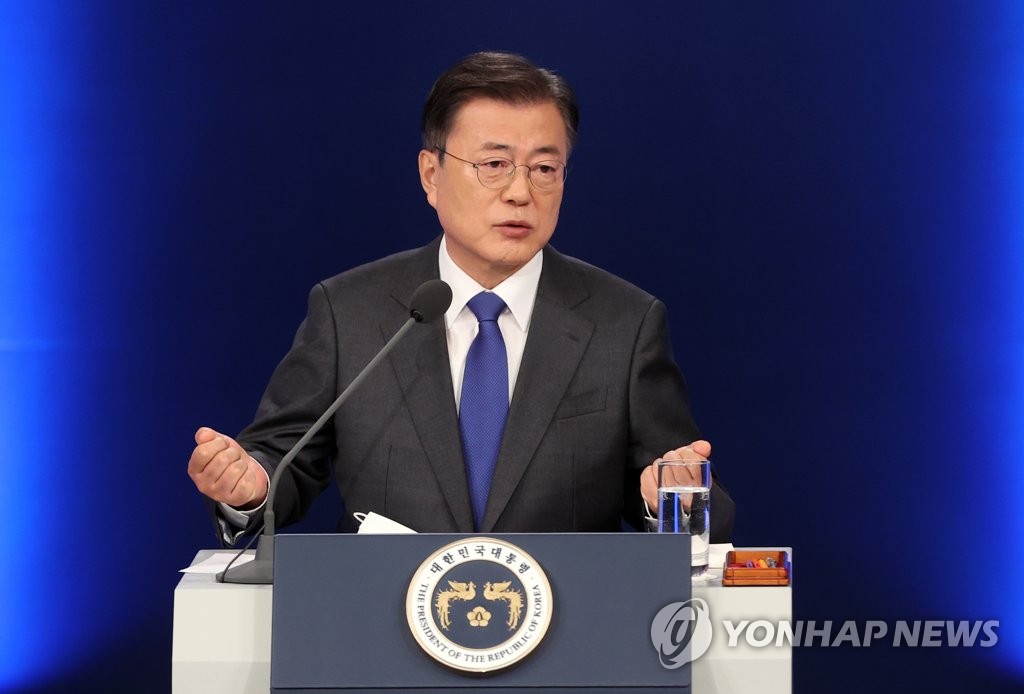 The president likened the election rout with being hit with "bamboo clappers" like a whipping.

He said the government needs to modify some property-related policy measures, including mortgage regulations and tax hikes, in order to help those without houses or single home owners, a matter to be discussed in detail among the Democratic Party, the government and Cheong Wa Dae.

He, however, dismissed the possibility of changing the underlying drive of curbing real estate speculation and expanding home supply.

Asked about a call for granting a special presidential pardon to Samsung Electronics vice chairman Lee Jae-yong, jailed over a bribery case, Moon said he would make a decision after listening enough to public opinions.

"It is a clear fact that we need to further enhance the competitiveness of our semiconductor industry, with global competition on chips intensifying," he said. But he said he also should consider fairness, related precedents and public consensus.

He also maintained a prudent stance on whether to give two former imprisoned presidents -- Lee Myung-bak and Park Geun-hye -- special pardons.

Moon clarified his view on another politically sensitive issue of the so-called text message bombs directed at politicians taking issue with Moon's policies. Some hardline supporters of Moon are accused of sending smartphone messages, often including abusive language and slander, to critics of the president or those seen as uncooperative.

A number of observers say such acts have hampered free and democratic discussions inside the ruling party and led to falling public support for it.

Moon said it's natural for people to express their opinions via text messages in the social networking service era.

Nonetheless, he requested that supporters of him voice their opinions in a more "polite and persuasive" manner, saying it would be hard to win support or sympathy through "rough and rude" messages.

The president defended his controversial nominations of three officials to lead the science, oceans and land ministries.

The National Assembly held confirmation hearings on them last week, but the opposition is demanding that Moon withdraw the nominations amid reports of alleged ethical lapses.

Moon said he chose them in consideration of their ability and expertise and added that he would wait another day for related discussions at the parliamentary before deciding whether to appoint them.

"All government capabilities will be mobilized and private-sector vitality will be enhanced so that our economy will grow at more than 4 percent for the first time in 11 years," he said.

"The administering of the first dose to everyone in the population who is eligible will be completed by the end of September, ensuring that herd immunity is achieved before our original target of sometime in November," Moon stated. 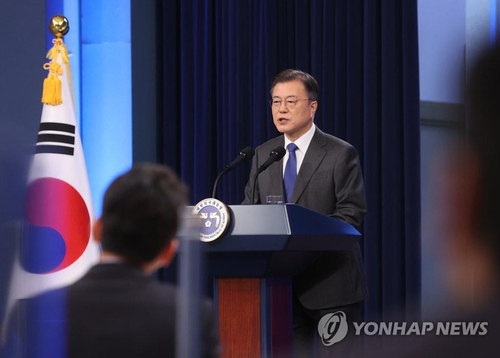 On the stalled Korea peace process, Moon reaffirmed a commitment to close cooperation with U.S. President Joe Biden. He cited a plan for his first in-person summit talks with Biden to be held at the White House in late May.

"The ROK-U.S. alliance will be solidified through the bilateral summit scheduled in late May," he said, referring to South Korea's official name, the Republic of Korea. "We will restore dialogue between the two Koreas and between the United States and North Korea and find a way to step once again toward peaceful cooperation by more closely coordinating policies toward North Korea."

With only a year to go in office, he made clear that, "I will not be pressed by time or become impatient during the remainder of my term."

He added that if there is an opportunity to restart the clock of peace and advance the peace process on the Korean Peninsula, "I will do everything I can."