WASHINGTON, May 10 (Yonhap) -- The source and destination of illicit weapons seized over the weekend in Arabian waters are still under investigation, a Pentagon spokesman said Monday, adding the U.S. does not exclude North Korea from its list of potential destinations.

The U.S. Navy earlier said it has seized thousands of illicit weapons from a stateless dhow in international waters in the North Arabian Sea.

"You mean as the potential destination? No," he said when asked if North Korea could be excluded from the line of investigation for the intended destination of the seized weapons. 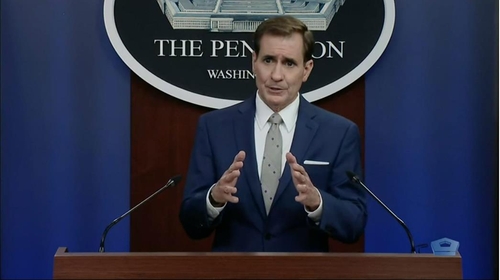 Kirby said the North, or apparently any other country for that matter, could not be excluded as a potential destination because the U.S. investigation has yet to be completed.

"As I said at the beginning, the final destination of this material is unknown. That's why we're investigating it," he said.

When asked if the new U.S. policy toward North Korea may affect joint military exercises of South Korean and U.S. forces, the Pentagon spokesman said the U.S. remains committed to the defense of South Korea and necessary training to that end.

"The approach that the administration wants to take is, in a phased approach, to try to find diplomatic space to get to the denuclearization of North Korea," he said. "Of course, here at the Defense Department we support that effort wholeheartedly.

"That said, the secretary also takes very seriously our security commitments to our treaty allies, the Republic of Korea, and we have an obligation -- working with them to make sure that forces on that peninsula, across all realms of service, are trained and ready."