SEOUL, May 12 (Yonhap) -- South Korea and Israel on Wednesday signed a free trade agreement (FTA) centered on broadening economic ties, a move that could help Asia's No. 4 economy speed up exports of cars and auto parts.

Trade Minister Yoo Myung-hee officially signed the pact with her Israeli counterpart Amir Peretz during a ceremony in Seoul, according to the Ministry of Trade, Industry and Energy.

The two sides struck the deal in 2019, three years after they launched negotiations.

"The FTA with Israel will not just center on lowering tariffs or improving the business environment, but it will also serve as a solid platform that builds foundations for their economic growth by speeding up cooperation in advanced industries," Yoo said.

South Korea is the first Asian country to have a free trade pact with Israel, which is expected to help Asia's No. 4 economy enjoy advantages over other neighbors, including China and Japan. 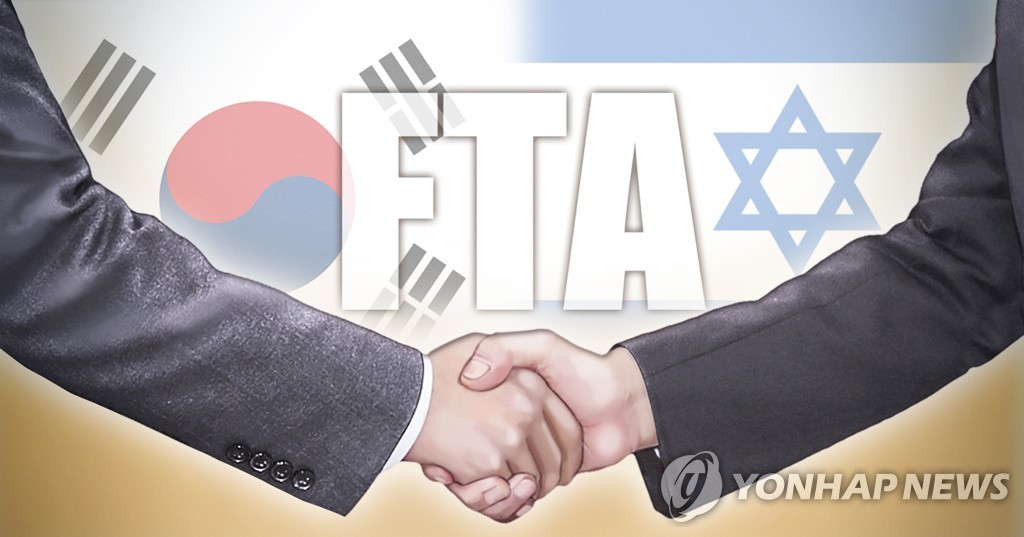 Under the FTA, South Korea will lift tariffs on 95.2 percent of the products, while those of Israel will stand at 95.1 percent.

Other beneficiaries include South Korea's textile and cosmetic products, whose 6 percent and 12 percent tariffs will be lifted by the FTA.

South Korea will also abolish the 30 percent tariff on grapefruits. The ministry, however, said the tariff will be lifted in phases over a seven-year period considering the protest from local farmers.

Seoul's tariff on medical instruments, which currently stands at 8 percent, will be eradicated over a decade.

South Korea, the global powerhouse of memory chips, added it will immediately lift tariffs on related equipment imported from Israel.

The latest FTA will also offer the so-called most favored nation and national treatment in terms of investment for companies that do not yet have a presence in the partner country.

South Korean workers based in Israel will be allowed to extend their stays in the Middle East country, which was limited at 63 months.

The agreement calls for a parliamentary approval before implementation. South Korea aims to have the FTA go into effect within 2021.

The latest FTA, however, will not cover the Palestine territories.

South Korea has been making efforts to expand its FTA portfolio in line with efforts to cope with protectionism, and more recently, the economic fallout from the COVID-19 pandemic.

Currently, South Korea has FTAs with 17 countries and regional blocs, including the United States, the European Union and the Association of Southeast Asian Nations (ASEAN).

A handful of free trade pacts currently awaits parliamentary approval, including those with Indonesia and Cambodia.