SEOUL, May 12 (Yonhap) -- Since the beginning of the 2011 season, the Lotte Giants have had eight managers, including one interim skipper, more than any other club in the Korea Baseball Organization (KBO) in that span.

Her Mun-hoe became the latest casualty on Tuesday, when he was dismissed one month into his second season as manager. He signed a three-year deal in October 2019, but after the team finished seventh among 10 teams last year and got stuck in last place after 30 games this year, he was shown the door. Larry Sutton, the Giants' minor league manager, was promoted to take over the KBO club, becoming the second foreigner to be given the position.

As the first American manager in KBO history, Jerry Royster guided the Giants to three straight postseasons from 2008 to 2010. But with the Giants failing to get past the first round in all three years, Royster wasn't brought back after his contract expired. 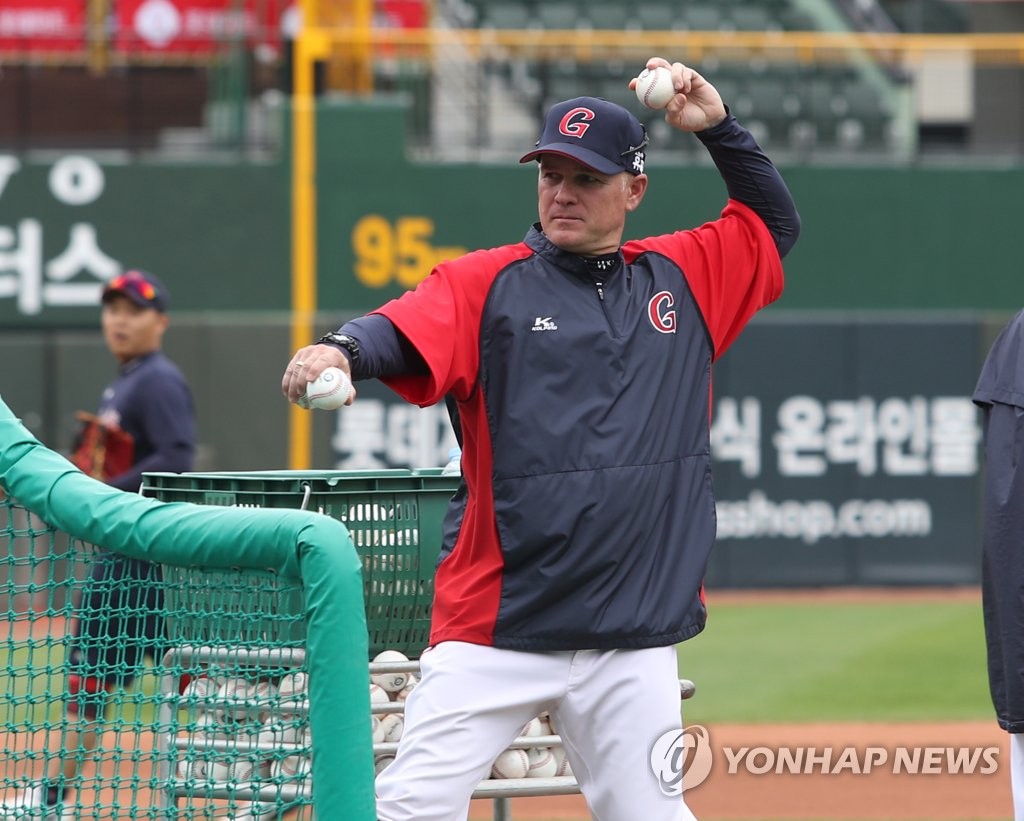 Then came a string of a half-dozen, underachieving managers, many of them gone before their contracts were up.

Skippers ultimately take the fall for on-field performances, and a well-worn cliche says managers are hired to be fired.

But such a jarring lack of stability at the helm may also be an indictment of the front office. It either hasn't hired the right man for the job for a decade or hasn't shown enough patience to see things through.

The Giants were especially dysfunctional during Her's short tenure. For most of the 2020 season, it was the worst-kept secret in the KBO that he and his general manager, Sung Min-kyu, didn't see eye to eye on lineup decisions and player development. And in announcing their firing of Her, the Giants said they felt the team and Her weren't moving in the same direction.

Sung, a former scout with the Chicago Cubs, wanted to develop young talent with an eye toward the future. Her, on the other hand, was at the opposite end of the spectrum when it came to giving young players a chance to play.

Her mostly relied on veterans, even for backup positions. Though the Giants played out the string late last season, Her refused to give minor leaguers a look in the KBO.

Her often said he didn't believe in playing young prospects only for the sake of doing so. He also didn't want to alienate veterans, fearing an adverse impact on team morale and chemistry in such instances. 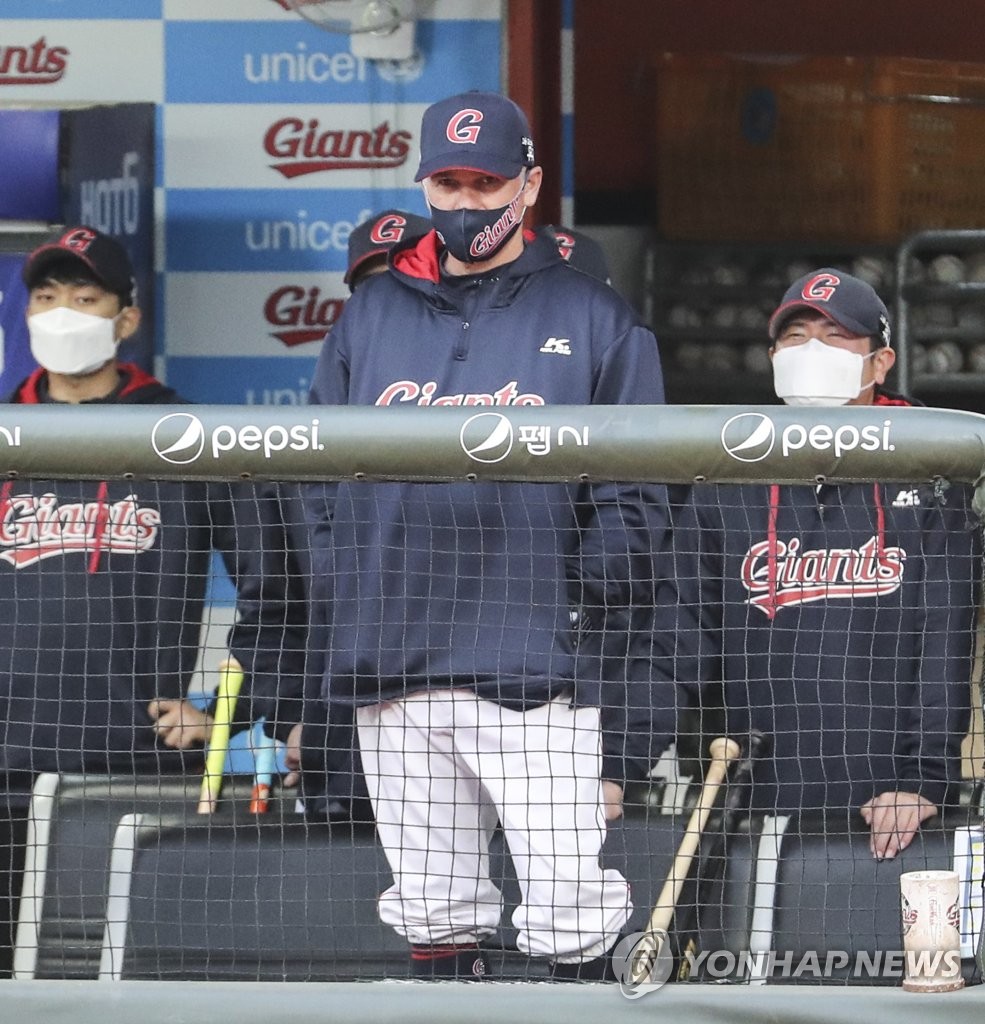 It begs the question, then, how Her was even hired in the first place. The Giants, coming off a last-place finish in 2019, wanted to begin a rebuilding process and decided Her was fit for the job, though he ultimately turned out to be almost allergic to putting young prospects on the field.

While the front office continued to invest time and money into revamping the Giants' minor league system, Her remained stubborn, and even passive-aggressive, in his refusal to get on the same page.

In late April, Her threw his minor league pitchers under the bus. With relievers Koo Seung-min and Park Jin-hyung getting knocked around early in the season, Her was asked if he considered demoting them to the minors and recalling younger arms. Struggling veterans get sent down all the time in the KBO, as managers seek to give them a chance to clear their heads and work on mechanical issues under considerably less competitive pressure.

But Her said, "It's hard to find good players there." 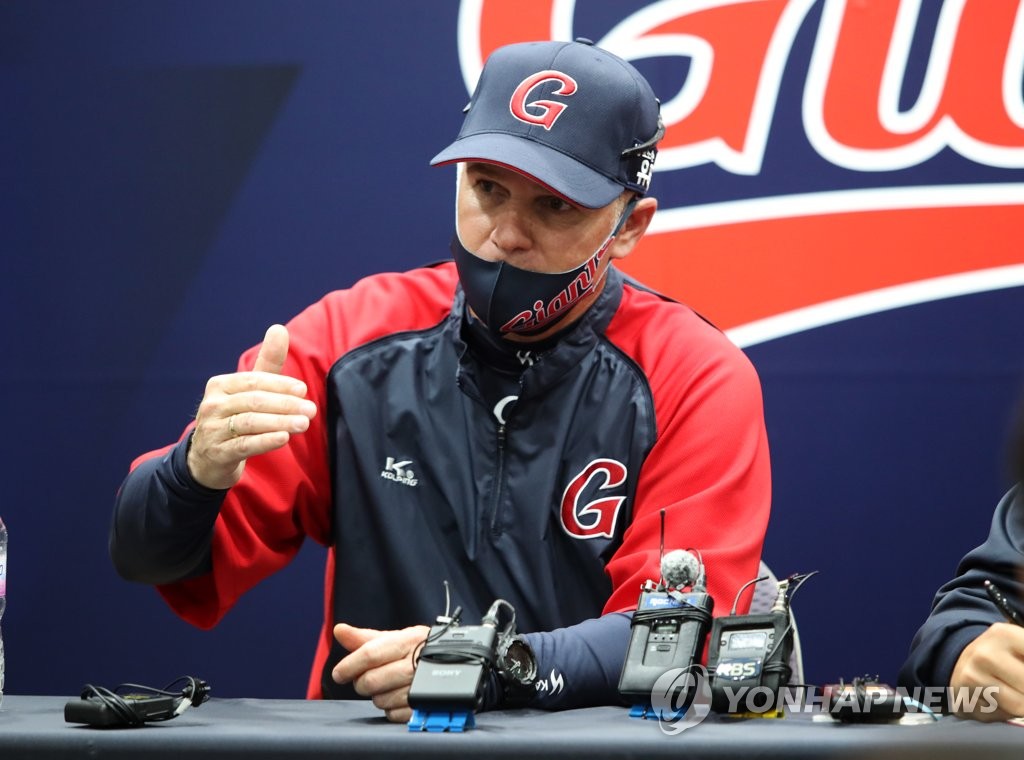 It's one thing for a manager to privately think his team's minor league farm is barren but quite another for him to say so publicly. It was a jab at the Giants' minor league system as a whole and a perfect illustration of where Her stood on the use of young players.

Earlier in April, Her drew the ire of the club's famously passionate fan base for his handling of a catching situation.

The Giants opened the season with three catchers: Kim Jun-tae, Kang Tae-yool and Ji Si-wan. Kim got the bulk of playing time at the onset though his bat -- he hit just .225 last year and began this season 2-for-18 -- left much to be desired. Kim has also had trouble throwing out would-be base stealers. Kang, too, scuffled at the plate and the supposedly defense-first catcher struggled in that aspect too. 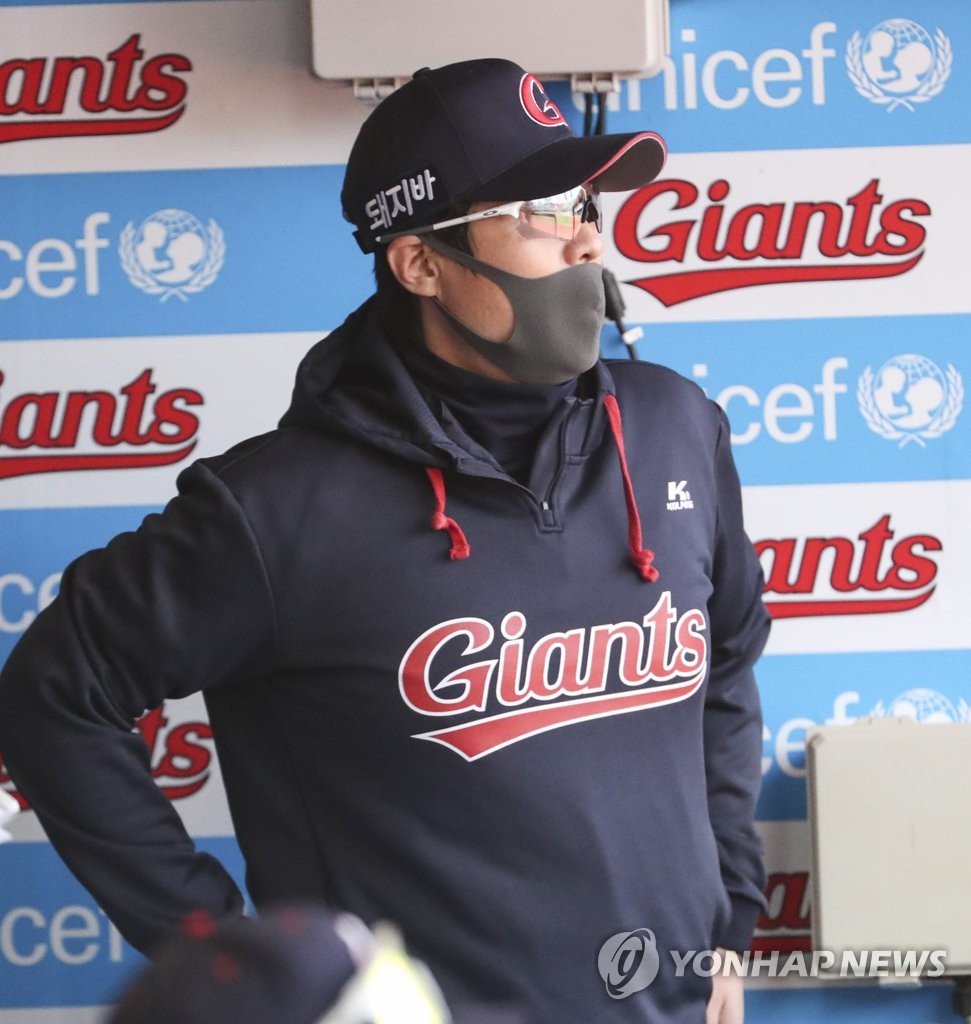 Ji, acquired in a trade from the Hanwha Eagles in November 2019, is regarded as the best hitter of the trio, with enough of an edge over the other two to make up for his defensive shortcomings. Ji has also been a good framer of pitchers, dating back to his Eagles days.

But Her never gave Ji a chance to showcase his developing game, and Ji was demoted to the minors on April 18.

Ji came in as a pinch runner against the NC Dinos on April 6 and then delivered a tiebreaking double in the top of the ninth inning.

But Ji went right back to the bench for the next two games. He had a pinch-hit appearance on April 9 and struck out.

The big blow, as far as fans are concerned, came two days later.

The Giants were trailing the Kiwoom Heroes 3-2 in the bottom of the 11th inning, and they had runners at first and second with two outs. Kang was due up, but the TV camera first panned to Ji, who was stretching and taking a few swings in the dugout in anticipation for a pinch-hit assignment that never came.

Kang grounded out weakly back to the mound to end the game. Ji was the only one of 15 Giants position players not to enter that game. Even Dixon Machado, who had missed time after taking a pitch to the head, had entered as a pinch runner.

The lineup card is definitely the manager's, and fans didn't necessarily question Her's right to set his lineup the way he sees fit.

However, they were frustrated with his lack of explanation for not playing Ji more, when, in their eyes, the player deserved at least a start to put his bat on display over a full game and demonstrate his improved defense. Her himself had spoken highly of Ji's offensive skill in the past. 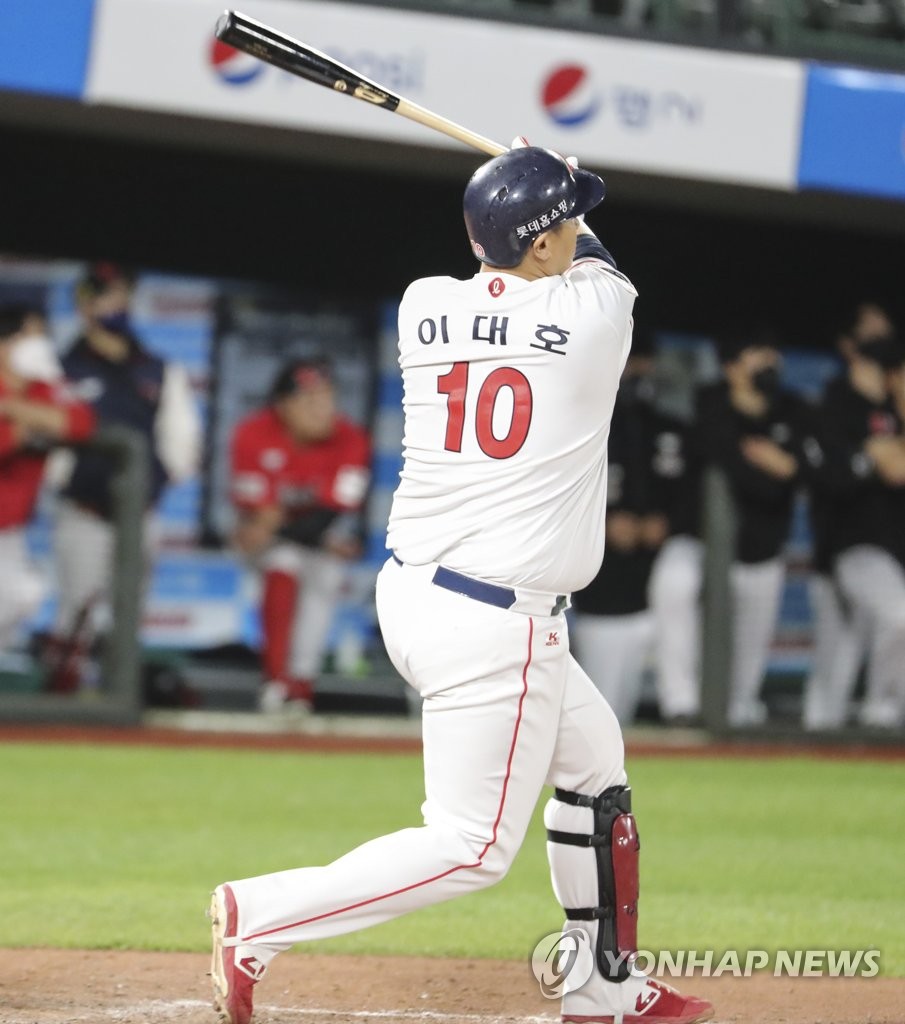 When asked about benching Ji the day after his game-winning double, Her appeared to be passing the buck to his coaches, saying, "My coaching staff and I had a discussion before making that decision."

Managers and coaches discuss lineup possibilities all the time. But the manager signs the lineup card. The buck should stop with him.

The Giants are now hoping Sutton, 50, will be a more responsible bench boss who will steer the club in the right direction. And the new skipper said he's ready to tackle the new challenge head-on.

"The philosophy and style I like is an attacking and aggressive baseball," Sutton said prior to his first game against the SSG Landers on Tuesday.

The former major leaguer played in the KBO from 2005 to 2007, and also served as a minor league hitting coach for the Pittsburgh Pirates and the Kansas City Royals. 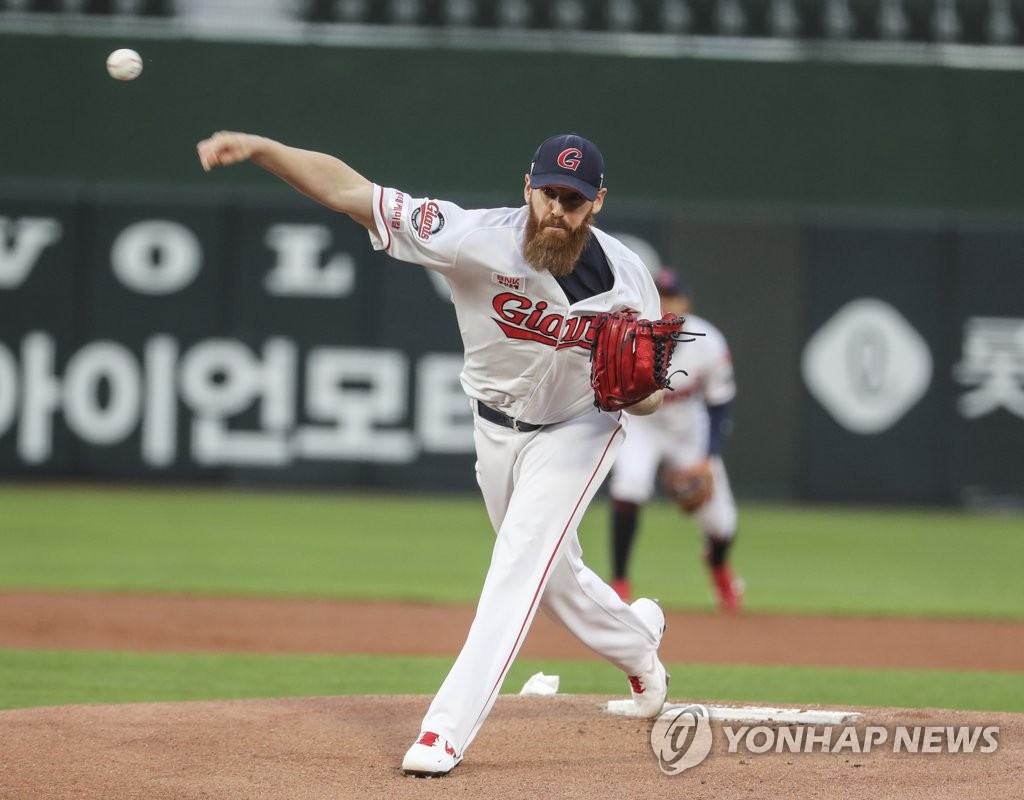 "I am not a genius but at the same time, I have a lot of experience. I've studied under some good managers. I've worked with a lot of good major league organizations that have been on the cutting edge of learning and using analytics," he said. "So I have a good idea on what data sets work in pitching, defense and offense."

Sutton said he wants to keep things simple for his players -- "Baseball is a simple game. Whoever scores the most runs wins the game," he said -- while preaching the value of teamwork.

"When we come out and compete as one, a lot of good things can happen," he said. "When we're able to grow our identity, then we become a more aggressive baseball team."

Sutton's philosophy may not lead to immediate success this year. The Giants blew a 4-1 lead over the SSG Landers to lose 7-6 in Sutton's managerial debut Tuesday. But if the rebuild -- or "restart," in Sutton's word -- bears fruit down the road, then another tumultuous managerial change will have been worth it.

The Giants haven't won a Korean Series title since 1992, the longest drought in the league. 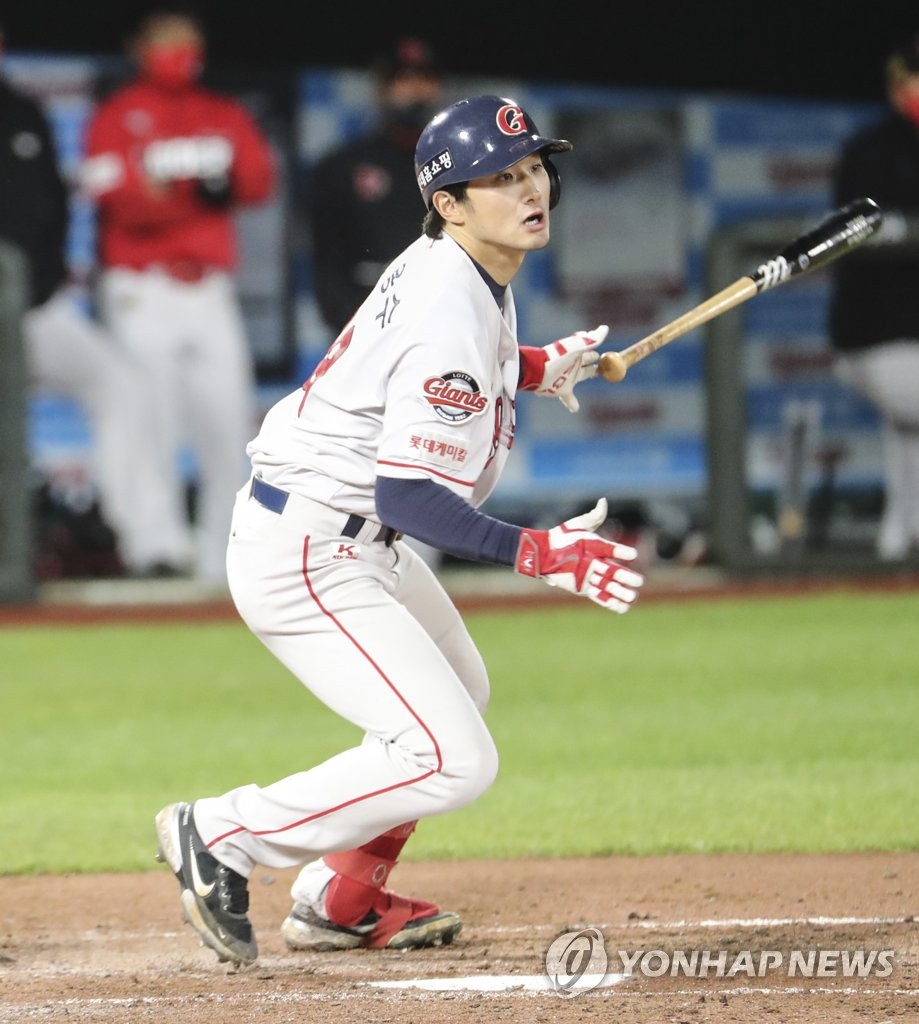