SEOUL, May 12 (Yonhap) -- Two foreign nationals arrested for posting threatening flyers at the French Embassy in Seoul last November were released on Wednesday after receiving suspended sentences from a court.

The Seoul Western District Court sentenced the two men -- one from Russia and the other from Kyrgyzstan -- to imprisonments of six months each, suspended for one year, on charges of posting threats against the diplomatic mission. 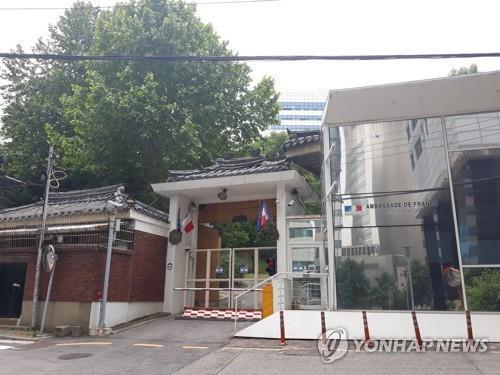 The two, both known to be 26-year-old Muslim believers, were arrested for posting four flyers, which carried messages such as "Do not ignore Muslims" and "Do not destroy our religion," on the embassy wall in central Seoul around 10 p.m. on Nov. 1. One of the flyers reportedly had a picture of French President Emmanuel Macron with a red X mark over it.

The court ruled that the two defendants' actions corresponded to threats against French Embassy staff and other relevant officials, but not against the French ambassador.

Under the ruling, the two were acquitted of the charges of threatening foreign envoys and were only convicted of the offense of intimidation.

"It seemed that they had only intended to intimidate embassy officials. They didn't appear to specifically aim their threats at the ambassador," the court said.

The court said it determined their sentences after considering that they have never committed any other crimes while living in South Korea and investigative agencies have not detected any signs of the existence of accomplices or instructions from above.