WASHINGTON, May 12 (Yonhap) -- The United States will continue to tackle the North Korean nuclear issue while at the same time pressing for improved human rights conditions, including freedom of religion, in the reclusive state, a senior U.S. official said Wednesday.

Daniel Nadel, a senior official from the U.S. Department of State office of international religious freedom, also argued that a push for improved human rights conditions in the North would ensure "better outcomes" by addressing fundamental problems.

"The nuclear issues are real. They are a significant challenge. We intend to address those issues head on, as we have. But there is no trade off between addressing human rights issues or addressing other matters of national security or bilateral concern," he said in a telephonic press conference.

"We can do all of these things at once, and in doing so, we both demonstrate the importance of our fundamental principles, but we also make better outcomes, because if we don't address these things in totality, then the possibilities for lasting peace and stability in the region are, in our view, reduced," he added. 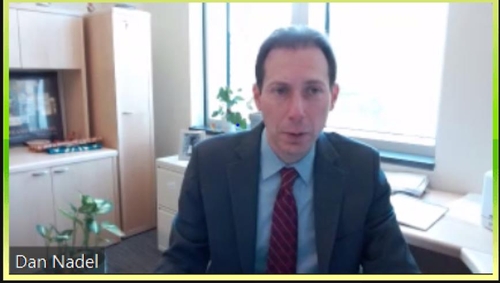 In December, the U.S designated the North as a state violator of religious freedom for the 19th consecutive year.

Nadel said putting human rights at center of diplomacy did not mean the issue will be raised at every chance the U.S. has to talk with North Korea.

"It's really a matter of the fact that this administration has made it clear that human rights, including religious freedom, are central focuses of United States foreign policy overall," he said later in a virtual interview with Yonhap News Agency.

"Of course, it depends on the conversation, depends on the timing, it depends on all sorts of other factors, but the overarching perspective of the United States when it comes to these issues is they are not going to be parceled out and excluded from the broader discourse. That's the basic premise that we're working from," he added.

North Korea has often reacted angrily to the U.S. reports on human rights and religious freedom, threatening to sever or boycott any dialogue with the U.S.

Nadel said the U.S. reports were not about the U.S. pointing its finger at others.

"When you look at what the reports actually are, these reports are not the voice of the United States government," he said in the interview.

In his earlier press conference, Nadel had also stressed the importance of a free flow of information into North Korea in a reaction to questions related to South Korea's anti-leafleting law that prohibits sending propaganda leaflets across the inter-Korean border to North Korea.

The U.S. official said the U.S. understood the concerns South Korea has in relation to the safety of its people who live close to the border.

"As part of our efforts to promote fundamental freedoms, we do believe access to information is vital. But we also recognize and understand the concerns that the Republic of Korea government was operating under with respect to this law," he told Yonhap, referring to South Korea by its official name.

"So I don't believe we have an opinion on the law itself. However, the important principle is that the information be available to individuals inside of North Korea," he said, adding the U.S. seeks to use a "number of different means" to transmit information to people in closed societies.