SEOUL, May 13 (Yonhap) -- South Korea said Thursday it plans to provide massive tax incentives and state subsidies to chipmakers to encourage them to spend a combined 510 trillion won (US$453 billion) by 2030, in line with its vision to become a global powerhouse in both memory and non-memory chips.

Under the plan dubbed the K-semiconductor blueprint, the government will also draw up a 1.5 trillion-won budget to support the development of next-generation power semiconductors and AI chips, according to the Ministry of Trade, Industry and Energy.

Another batch of 1 trillion won worth of low-interest loans will be provided to support facility investment by local chipmakers, including 8-inch wafer foundry lines. South Korea is home to leading global players including Samsung Electronics Co. and SK hynix Inc.

Aided by a set of supporting measures, South Korea aims to more than double its annual outbound shipments of chips to reach a whopping $200 billion in 2030 from $99.2 billion tallied in 2020. 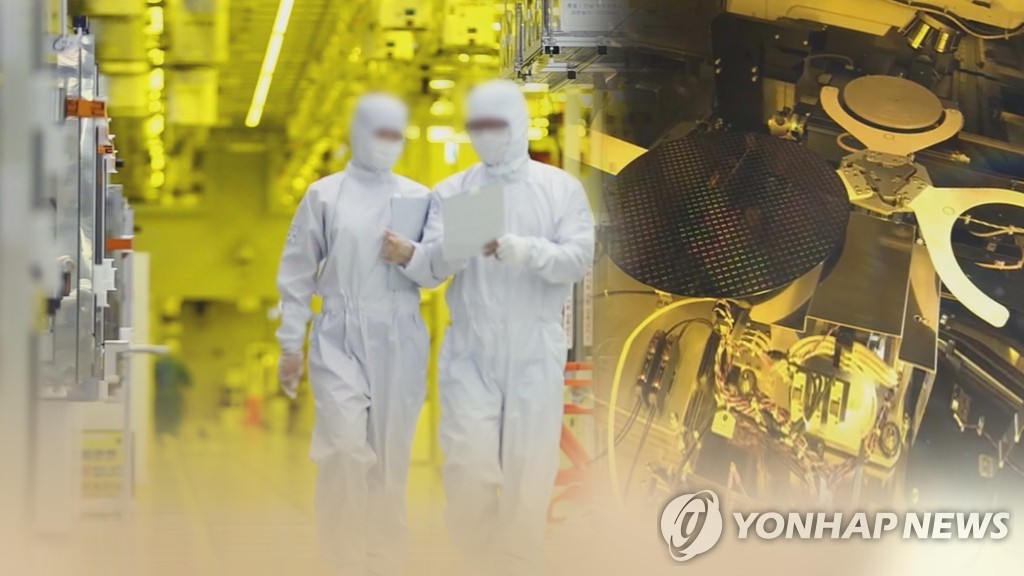 President Moon Jae-in received a related report in person, as he visited Samsung's semiconductor manufacturing center in Pyeongtaek, Gyeonggi Province, which is being developed as the world's largest chip production complex.

He pointed out that global competition is getting fiercer in the sector.

"The semiconductor industry has moved to an era of competition among countries, beyond competition among companies," he said in a speech at the facilities located 70 kilometers south of Seoul. Other attendees at the event included Gyeonggi Gov. Lee Jae-myung, South Chungcheong Gov. Yang Seung-jo and North Chungcheong Gov. Lee Si-jong, as well as senior executives of such companies as Samsung and SK hynix.

Moon stressed that South Korea will "overcome the strong wave of global supply chains being reorganized, through the K-semiconductor strategy, with the public and private sectors joining forces."

Citing some other nations' aggressive support for their chip-making industries, like subsidies and tax breaks, he stated, "Our government will also be united with businesses for (the goal of making the country) a semiconductor powerhouse."

The government will designate semiconductors as a "national innovation strategy technology" and increase tax benefits to as much as six times the current level, he said.

"Regarding research and development investment, tax deductions of up to 50 percent will be provided," he added. 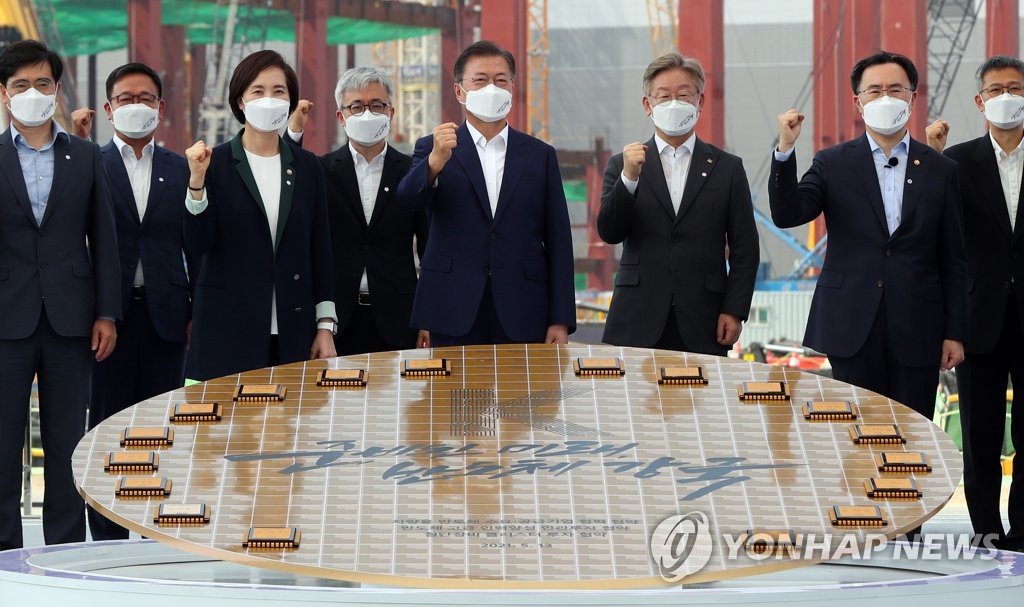 The sector especially has been among a few winners amid the COVID-19 pandemic. Exports of chips advanced 30.2 percent on-year in April to $9.3 billion, extending their gains to a whopping 10 consecutive months.

South Korea, however, has been lagging behind global peers in terms of non-memory chips.

For example, Samsung Electronics accounted for 17 percent of the global foundry market in the first quarter of 2021, falling behind the 55 percent market share held by Taiwan-based TSMC.

The foundry business refers to making chips for other companies that do not have a semiconductor plant, such as fabless firms and non-memory chip firms. In terms of the fabless sector, South Korea currently takes up less than 2 percent of the global market.

To beef up the sector's competitiveness, the country will establish a new semiconductor cluster covering Pangyo and Yongin, just south of Seoul, which will help local chipmakers operate a stable supply chain, according to the ministry.

Pangyo will become the hub for South Korea's fabless industry, with Giheung focusing on the foundry business. Hwaseong and Pyeongtaek will continue to serve as the hub for the production of memory chips.

South Korea's No. 2 chipmaker SK hynix Inc. said earlier it plans to build a new semiconductor complex in Yongin with a budget of 120 trillion won, which has won state approval. 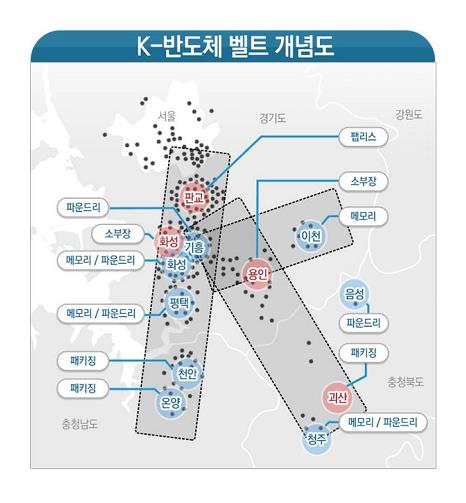 To induce chipmakers to carry out scheduled investment plans, the country said it will offer various tax benefits and subsidies.

For example, South Korea will offer around 40 to 50 percent tax credits for investments made in R&D projects for new chip technologies, along with 10-20 percent tax benefits for related facilities.

The new policy is significant as South Korea currently offers only a 3 percent tax credit for conglomerates' facility investments.

The government and the state-run Korea Electric Power Corp. (KEPCO) will support up to 50 percent of the costs needed to build power infrastructures for chip lines.

Other plans include lifting unnecessary regulations in terms of chemicals used at the chip production lines.