Abrams made the remark at a farewell event in Seoul, saying the U.S. will continue to work with its allies "to address the threats posed by North Korea through diplomacy and credible deterrence."

"Any potential adversary should never, ever underestimate our resolve and commitment to defend the Republic of Korea," the general said, referring to South Korea by its official name.

The remarks came as denuclearization negotiations between the U.S. and the North remain stalled since the collapse of the Hanoi summit in 2019.

The new U.S. Joe Biden administration recently concluded its policy review on Pyongyang and offered to resume dialogue, but North Korea has shown no visible reaction to the proposal. The North earlier said it will ignore the U.S.' overtures until Washington gives up what it calls a hostile policy against the regime, warning of a "crisis beyond control."

Abrams, who is also at the helm of the U.N. Command and the South Korea-U.S. Combined Forces Command, took office in November 2018.

In December, then U.S. President Donald Trump nominated Army Pacific Commander Gen. Paul LaCamera to succeed Abrams to lead the 28,500 American troops in South Korea. The nomination is now pending at the Senate Armed Services Committee for a confirmation hearing.

At Thursday's event, Abrams received a Korean name, Woo Byung-soo, as a gift from a South Korea-U.S. friendship group for his "contribution to the alliance and defense of South Korea."

"Serving as the Commander of the United Nations Command, the Combined Forces Command and the U.S. Forces Korea over the last 2 1/2 years has been a professional honor of my life," he said.

Expressing gratitude for "a lifetime of memories" in South Korea, Abrams said, "I am going to have to find a place in North Carolina that makes good kimchi," a traditional Korean side dish normally made of fermented cabbage, salt and hot peppers. 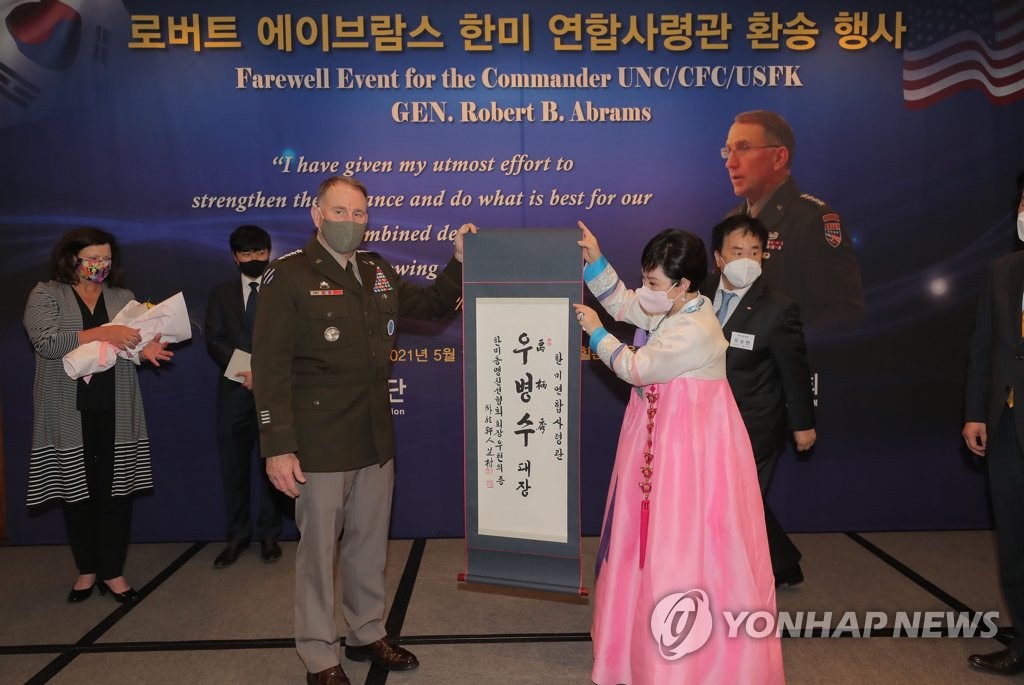