SEOUL, May 14 (Yonhap) -- Hybe, the K-pop powerhouse behind BTS, Seventeen and Enhypen, has opened what it calls a "music museum" for its artists and fans at its new headquarters in central Seoul.

The 4,700-square meter venue spread across two basement floors at Hybe Yongsan features giant screens that show a rotating selection of videos of its artists as well souvenirs from music production and miscellaneous objects that helped create the K-pop powerhouse.

A preview of Hybe Insight on Wednesday began with an entrance through a series of rectangular light frames that brightened up a dark hallway as futuristic sounds flowed in the background. The short walk led to an exhibition space called "Innovative Sound." 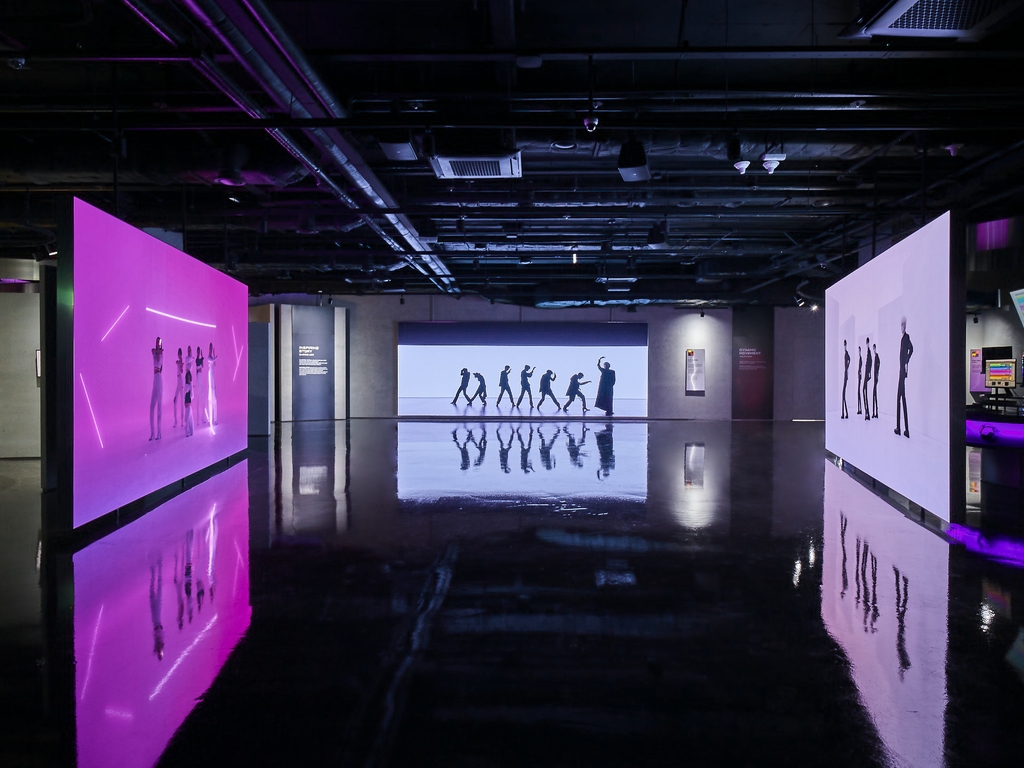 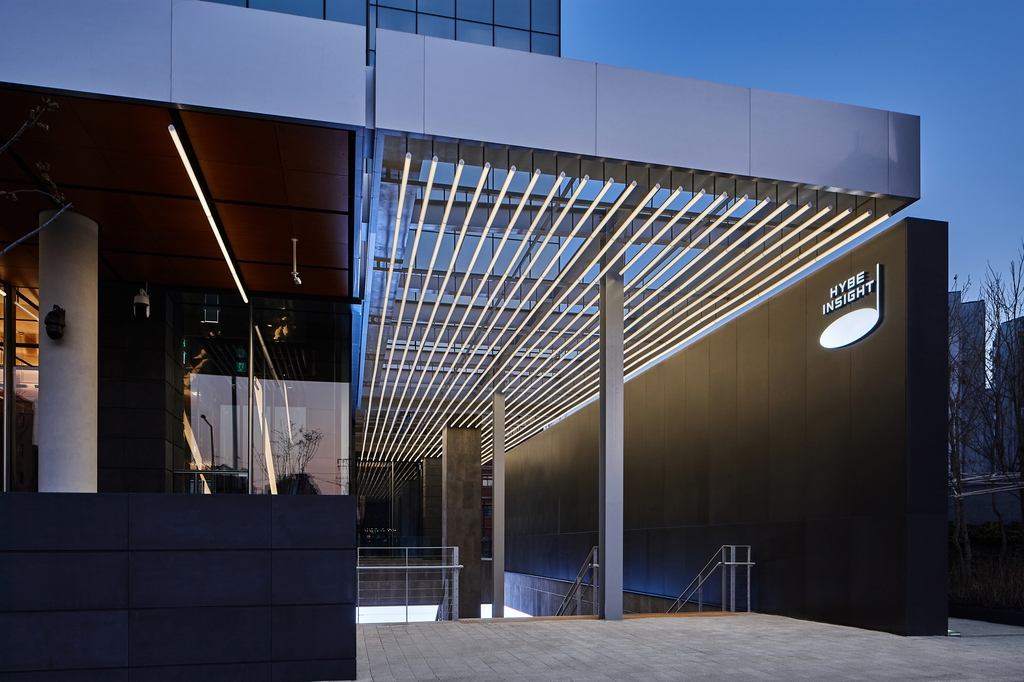 An on-site guide explained that the exhibition space is one of three spaces on the lower basement floor that use sound, movement and story to explain Hybe's music.

The venue was decorated with animations, installations and videos featuring the K-pop giant's music producers and artists. One video, for instance, shows the producers Pdogg and Bumzu, who are affiliated with Hybe labels Big Hit Music and Pledis, respectively, speaking about their musical philosophy.

Videos recorded using 360-degree cameras allow visitors to navigate through the personal studios of Pdogg and Bumzu as well as three BTS members -- RM, Suga and J-hope. Another interactive feature lets visitors get a taste of being a record producer by adding or removing sound layers from Hybe hit songs lke Nu'est's "Bet Bet" and BTS' "Fake Love." 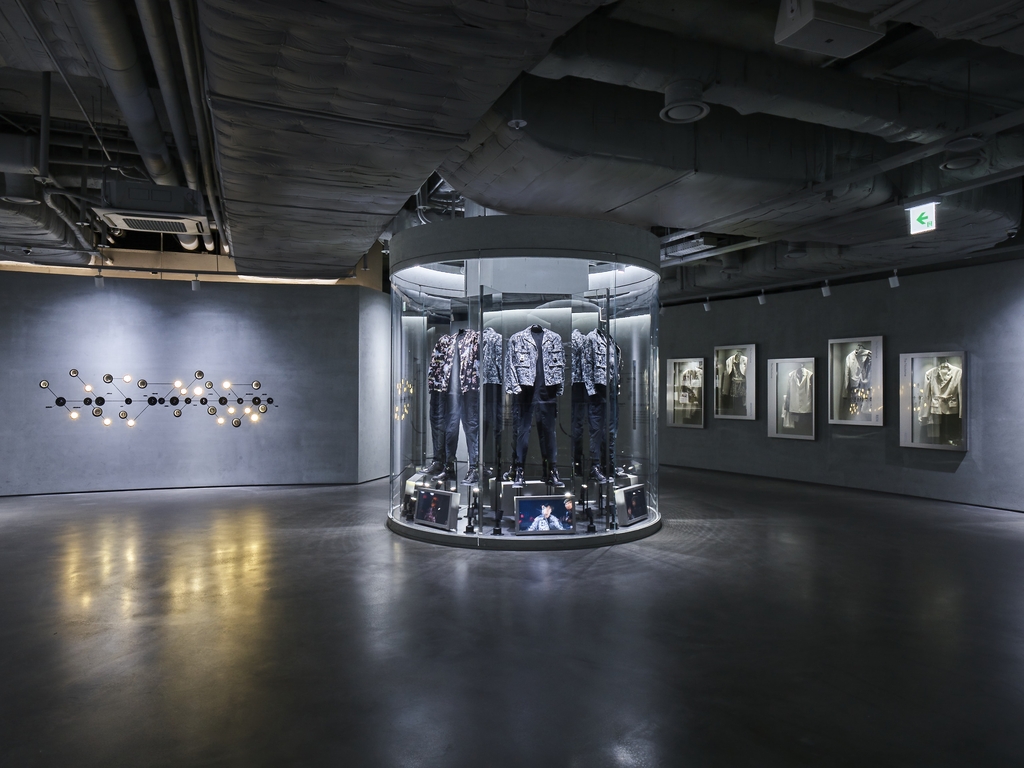 In contrast to the first sector that focuses on sound, the other two sectors on the lower floor center around the visual aspects of music production. Giant screens show some of the company's artists dancing in front of simply decorated screens so that the audience can solely focus on the choreography.

Behind-the-scene recordings of dance studios, meanwhile, shows the singers fine-tuning their dance moves, while headsets and microphones that Hybe musicians -- such as Jimin of BTS and Vernon of Seventeen -- wore during their performances are also on display.

Graphic artworks inspired by the lyrics of Hybe songs such as the BTS megahit "Dynamite" as well as books like Erich Fromm's "Art of Loving," Murray Stein's "Jung's Map of the Soul" and Herman Hesse's coming-of-age novel "Demian" were also on display.

The three books are known to have inspired the BTS albums "Love Yourself," "Map of the Soul: Persona" and "Wings." 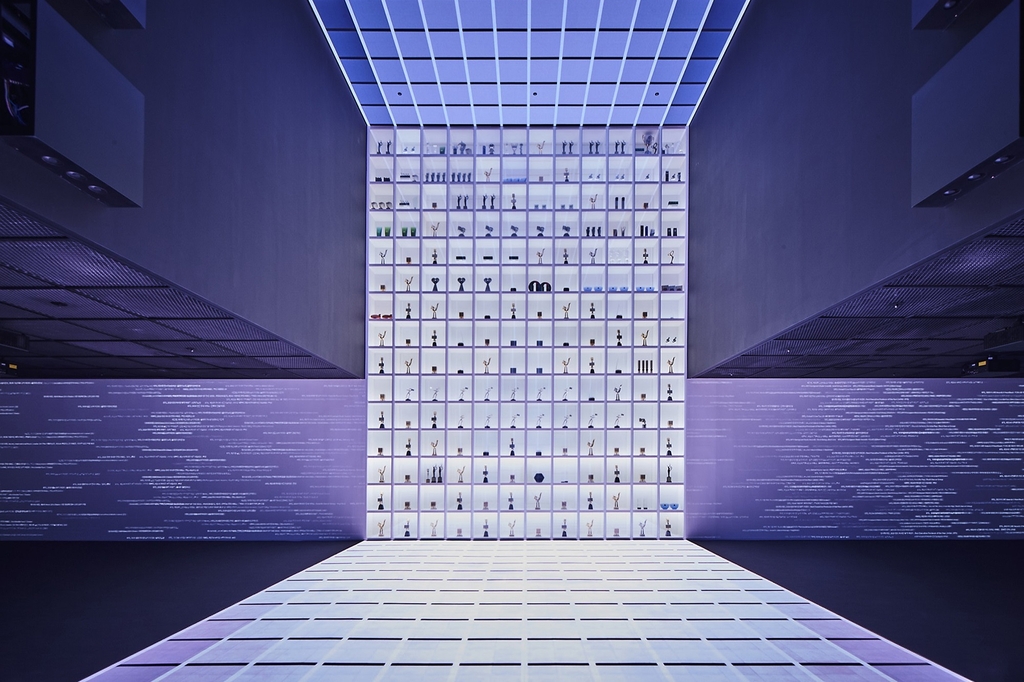 Before visitors head to the upper floor, they enter a chamber filled with immersive screens and a 8.5-meter trophy wall that displays all the trophies won by Hybe musicians. A seven-minute video narrated by singer Lee Hyun takes visitors through the company's history and its milestone moments.

The upper floor, meanwhile, moves away from music and shows an array of objects and artworks that were inspired by Hybe's music. The company said it plans to run special exhibitions with visual artists from here and overseas going forward.

For its first special exhibition, Hybe collaborated with Taiwanese American artist James Jean, known for his poetic and mythical paintings and illustrations. Jean worked on a giant painting titled "Garden," taking a cue from the BTS song "The Truth Untold."

Seven totem figures that resemble the seven-piece act's members are also among Jean's works on display. The remaining upper floor allows visitors to experience music through different senses, such as light, vibration and scent.

One room, for instance, is empty except for flowers and greenery decorations hanging from the ceiling, while a scent inspired by the BTS song "Euphoria" fills the space. Costumes and accessories that BTS and Seventeen wore are also displayed.

The exhibition ends with a 10-minute video of Hybe musicians speaking on music and life. Through screens installed on all walls of a dark room, they talk about what it was like to be separated from their families and friends for training or the agony of comparing themselves to more talented people.

They, however, reach a conclusion that they exist because of their fans and thank them for always being there. BTS member Suga notes that he "sings for those who listen to my music" and pledges to keep on singing until "more and more musicians will come, having listened to our music." 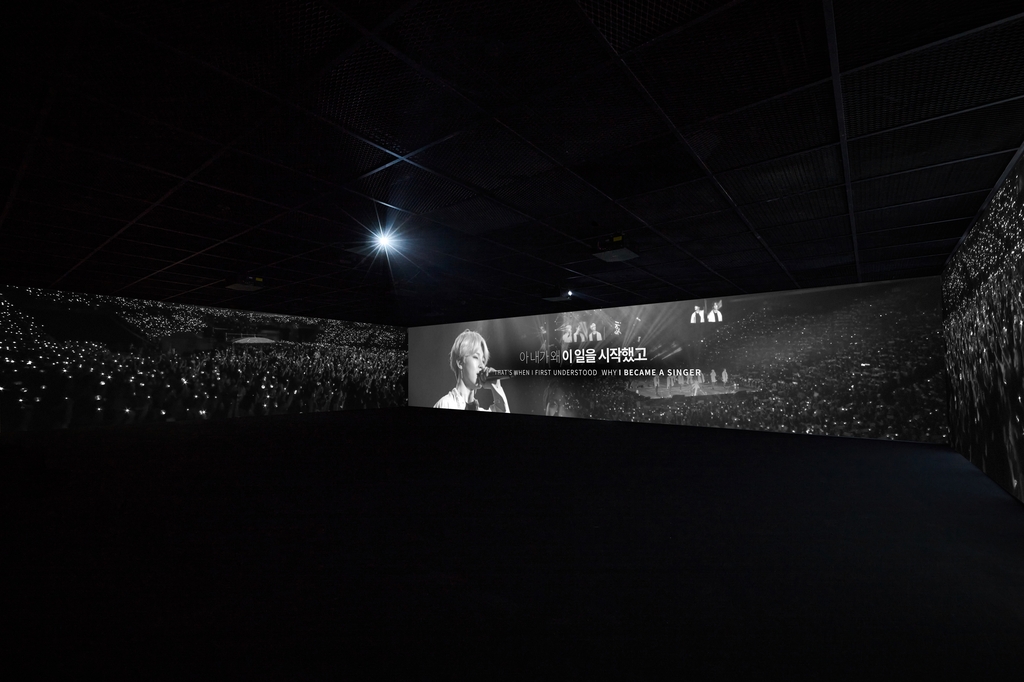 Hybe Insight officially opens Friday. The venue runs Tuesday through Sunday, with tickets available online. Visitors can download audio guides by some of their favorite celebrities -- like RM of BTS, So-won of GFriend and Jung-won of Enhypen -- through a mobile app.