The Seoul government launched due diligence after a group of U.N. special rapporteurs on human rights noted South Korean firms' potential involvement in alleged rights abuses through their supply chains in China, in a March 12 letter to Seoul.

Two South Korean conglomerates, Samsung and LG, were among the firms that the rapporteurs listed in their letter posted this week on the website of the Office of the U.N. High Commissioner for Human Rights (OHCHR).

"Related due diligence is ongoing, and within the scope of what the government has found out at this point, there is no such content of rights violations involving South Korean firms," the official told Yonhap News Agency on condition of anonymity.

On Wednesday, the government sent a reply to the rapporteurs to explain the result of its due diligence and a set of legal and other measures that it has taken to prevent involvement in human rights abuses, the official said. 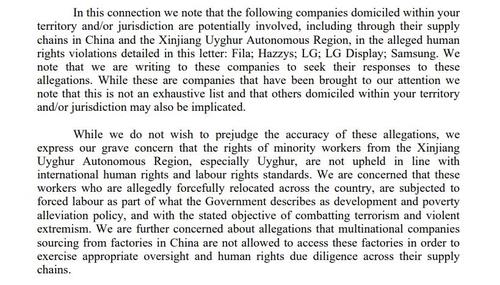 In the March letter, the rapporteurs called attention to workers in Xinjiang and other parts of China, who they said are allegedly "subject to exploitative working and sub-standard living conditions that may fall under the definition of forced labor."

"We express our grave concern that the rights of minority workers from the Xinjiang Uyghur Autonomous Region, especially Uyghur, are not upheld in line with international human rights and labor rights standards," the letter read.

"We are further concerned about allegations that multinational companies sourcing from factories in China are not allowed to access these factories in order to exercise appropriate oversight and human rights due diligence across their supply chains," it added.