GWANGJU, May 13 (Yonhap) -- A new international video press award has been created in honor of late German journalist Jurgen Hinzpeter, the first western reporter to send out footage of the bloody crackdown on the Gwangju people's pro-democracy uprising of May 1980, its organizers said Thursday.

The May 18 Memorial Foundation and the Korea Video Journalist Association held a news conference in Gwangju, 330 kilometers south of Seoul, to announce the establishment of the Hinzpeter Awards and plans to pick its first recipients this year. 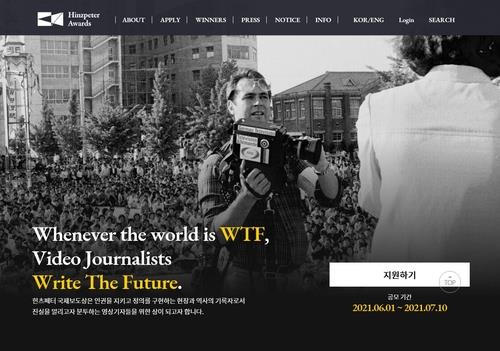 The award is intended to remember Hinzpeter's journalistic spirit behind his on-the-ground coverage of the May 18 Democratization Movement and reflect on South Korean video journalists' failure to fulfill their role, the organizers said.

The Hinzpeter Awards Organizing Committee said it plans to accept applications from June 1 to July 10, adding all video news productions broadcast from the beginning of last year to May 31 this year are eligible.

The first award winners will be announced in late August after being screened by journalists at home and abroad, scholars, artists and civic activists. Seoul and Gwangju will alternately host the awards ceremony, with the inaugural one set to take place in the capital city on Oct. 27.

Hinzpeter, then a Tokyo correspondent for German public broadcaster ARD-NDR, was the first western journalist to send out footage of the bloodshed. He gained further fame after being portrayed in "A Taxi Driver," a 2017 box-office success that drew more than 10 million viewers in South Korea.

On May 18, 1980, the military cracked down on demonstrators, including students, protesting against then President Chun Doo-hwan, who had taken power in a military coup a year earlier. The harsh quelling of the uprising left hundreds of people dead and thousands wounded.