WASHINGTON, May 13 (Yonhap) -- U.S. Secretary of State Antony Blinken reaffirmed his country's commitment to U.N. Security Council resolutions on North Korea on Thursday, amid U.S. outreach for engagement with the reclusive North.

The top U.S. diplomat said he and his Australian counterpart, Marise Payne, discussed a range of challenges, including North Korea, in their bilateral meeting in Washington.

"The (Australian) foreign minister and I touched on a number of key challenges that we face together," he said in a joint press conference with Payne at the State Department. "I reiterated that the United States will not leave Australia alone on the field, or maybe I should say alone on the pitch in the face of economic coercion by China. That's what allies do. We have each other's backs, so we can face threats and challenges from a position of collective strength," he said.

"And we understand as well our shared commitment to U.N. Security Council resolutions on North Korea," he added.

His remarks follow reports that the U.S. has reached out to North Korea for a second time to explain the outcome of its recently concluded North Korea policy review.

Washington earlier said it had sought to engage with North Korea in mid-February, but that Pyongyang had remained unresponsive.

White House spokeswoman Jen Psaki has said the U.S. will not strive for an all-or-nothing "grand-bargain" deal with the North or rely on the so-called "strategic patience," a wait-and-see policy of the former Barack Obama administration.

Instead, the new Joe Biden administration will seek a "calibrated, practical" approach to the denuclearization of the Korean Peninsula, she said on April 30. 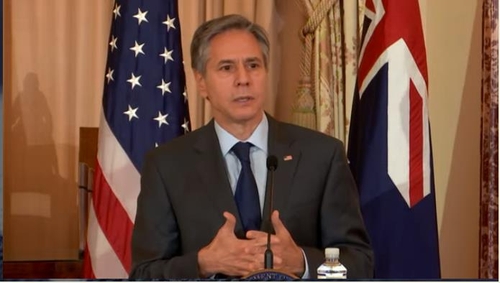