In a survey conducted by Gallup Korea on 1,007 adults nationwide from Tuesday to Wednesday, 42 percent picked Gov. Lee, affiliated with the ruling Democratic Party (DP), as their favored candidate for the next presidential election slated for March 2022.

Yoon, who has led the presidential hopefuls' race in various polls, fell to second place, with 35.1 percent support.

The result marked the first time Lee sat at the top in a hypothetical two-way race against Yoon, considered a potential candidate for the opposition bloc, in recent polls.

Lee outweighed Yoon across all regions except for the North and South Gyeongsang provinces, a traditional stronghold of the main opposition People Power Party, and Gangwon Province.

In a companion survey by Gallup Korea measuring the popularity of potential presidential contenders across all political parties, Lee also finished first, with 23.6 percent. 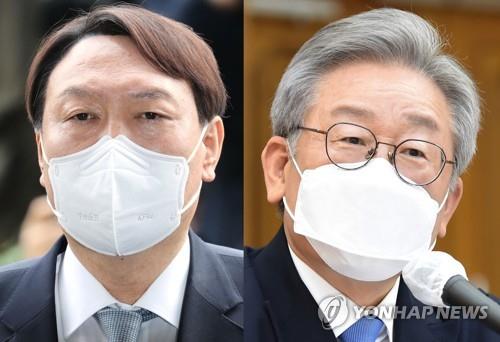 A separate two-way race survey on the Gyeonggi governor and the former prosecutor general released Friday by Realmeter, however, showed Yoon remaining as the front-runner, suggesting that the state of the race is both extremely volatile and competitive.

In the Realmeter poll conducted on 1,012 voters from Tuesday to Wednesday, Yoon garnered 45.7 percent of support, enjoying a comfortable lead over Lee, who registered 35.5 percent support.

The former prosecutor gained more traction among those in their 60s and 50s, while Lee was strong among 40-something voters.

The latest polls had a 95 percent confidence level with a margin of error of plus or minus 3.1 percentage points.