SEOUL, May 16 (Yonhap) -- A North Korean propaganda outlet on Sunday criticized South Korea's ongoing biennial rear area training and recent joint exercise with the United States, warning that it will only "stab itself in the eyes" by confronting the North.

Last week, the Joint Chiefs of Staff (JCS) kicked off the Hwarang training in the southeastern city of Daegu and its surrounding North Gyeongsang Province as part of efforts to maintain an integrated defense posture. The exercise is slated to run until November in five different regions.

"(South Korea's) move for military buildup and drills are strictly based on its plan to preemptively strike our Republic and is a factor that further aggravates the already critical tension on the Korean Peninsula," Tongil Voice said.

It also blamed South Korea for being "the very country that destroys peace and stability" and warned that it will result in "stabbing itself in the eyes with its bare hands" by confronting the North.

South Korea and the U.S. also held a joint cargo loading and unloading drill in early May at Daegu Air Base. 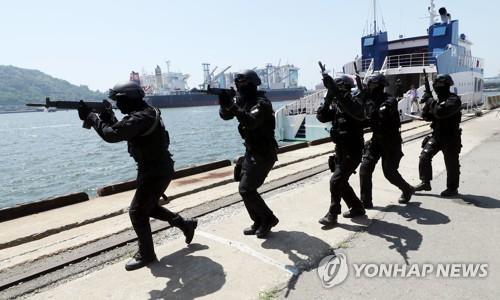