SEOUL, May 17 (Yonhap) -- Samsung Electronics Co. may unveil its plan later this month to build a new chip factory in the United States, industry sources said Monday, as the South Korean tech giant tries to cope with rivals' capacity expansions.

Speculation has run high that Samsung would reveal its U.S. investment upon the summit between South Korean President Moon Jae-in and U.S. President Joe Biden to be held in Washington on Friday (local time).

Samsung, the world's largest memory chip producer and No. 2 foundry firm, has been mulling building a US$17 billion foundry factory in the U.S., with Texas, Arizona and New York mentioned as possible candidate sites.

Kim Ki-nam, who heads Samsung's chip business, is expected to visit the U.S. as a member of President Moon's business delegation for the summit and may confirm the plan after meeting with U.S. officials, sources here said.

Samsung was the only South Korean firm to join a White House online meeting last month to discuss global semiconductor shortages. The company has reportedly been invited again to a virtual meeting to be hosted by U.S. Commerce Secretary Gina Raimondo on Thursday. 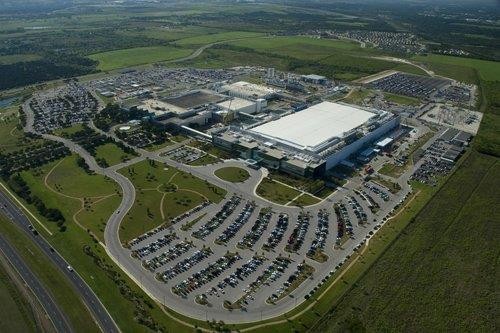 The tech giant already runs a chip facility in Austin, Texas, but the need for additional U.S. investment emerged after its rivals moved ahead for capacity expansions.

Taiwan Semiconductor Manufacturing Co. (TSMC) recently announced that it will invest $100 billion over the next three years for capacity expansion.

The world's top contract chip maker already unveiled last year it would set up a $12 billion plant in Arizona, but speculation has been growing that the company may build five additional fabs with advanced nodes.

Intel Corp., the world's leading semiconductor seller, also announced that it will invest $20 billion to expand its chipmaking capacity and teased its re-entry to the foundry business.

Samsung's U.S. investment will also be in line with its vision of becoming the world's No. 1 player in the logic chip and foundry sectors by 2030. The company last week said it will spend an additional 38 trillion won to expand its previous investment plan of 133 trillion won unveiled in 2019.

Industry observers said Samsung would benefit from various incentives if it decides to build a new chip facility in the U.S. The Biden administration has been pushing for a $2 trillion infrastructure plan, which includes $50 billion for semiconductor manufacturing and research.

Samsung's U.S. chip plant investment may be in offing: sources

Samsung's U.S. chip plant investment may be in offing: sources