SEOUL, May 17 (Yonhap) -- President Moon Jae-in articulated his resolve Monday to bear fruit in efforts to cement a COVID-19 vaccine partnership with the United States during his visit there later this week.

Moon was referring to his plan to hold summit talks with President Joe Biden at the White House on Friday (local time), speaking at a weekly meeting with his senior Cheong Wa Dae aides.

"I will use this visit to the U.S. as an opportunity to strengthen cooperation on vaccines and (for South Korea) to move toward the goal of becoming a global hub for vaccine production," the president said in front of pool reporters.

His government aims to provide 13 million people here with coronavirus vaccine shots by the end of June this year in order to achieve herd immunity no later than November.

The supply of vaccines made by U.S. firms is apparently crucial to attain the goal. In particular, South Korea is pinning its hopes on its advanced biotech production capacity, as it is seeking to emerge as a global vaccine production hub. 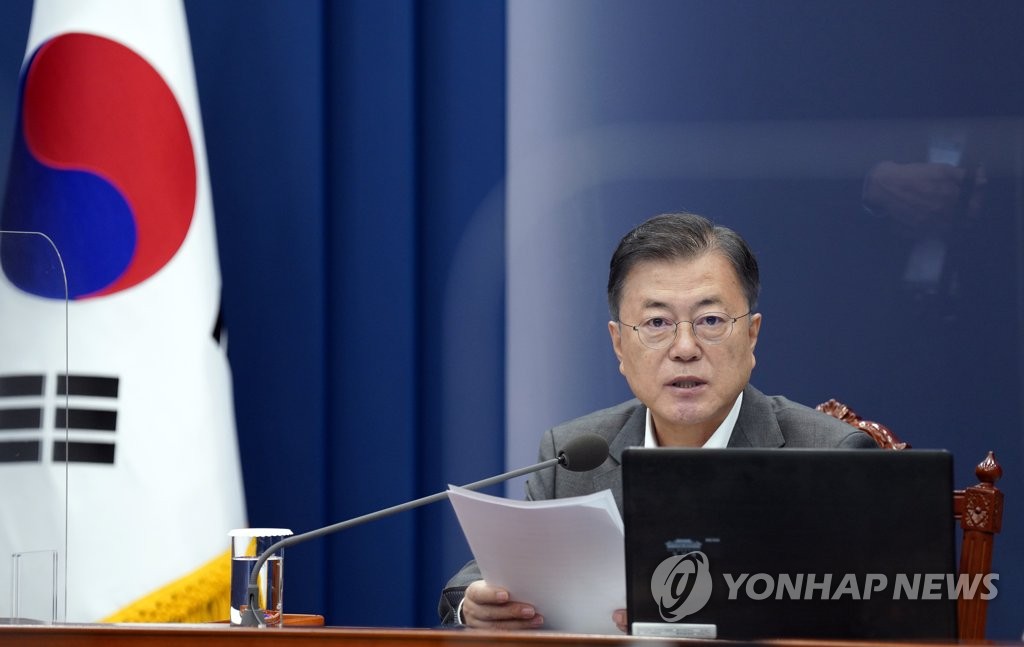 On the economy, Moon again stated that Asia's fourth-biggest economy is making a "strong rebound."

The government will make all-out efforts to achieve at least 4 percent growth in the gross domestic product in 2022, he said.

What is more important at the current moment is to link such economic growth with an improvement in "distribution" so that people's lives will actually get better, he added.

Above all, he stressed, creating jobs is a top priority as it is directly linked with the people's livelihoods.

He then offered an apology over the continued deaths of workers at factories and other industrial sites.

"I am very sorry for the news of deaths in industrial accidents occurring in places," he said and emphasized the importance of implementing relevant policy measures with concrete actions.