The task force concluded that land speculation allegations facing Reps. Yang Hyang-ja and Yang Yi Won-young of the Democratic Party (DP) were unfounded and decided not to formally investigate them.

"The two lawmakers were not in a position to take advantage of insider information at the time of (related) land purchases," Choi Seung-ryul, chief investigator at the task force, said during a press briefing.

Neither of them were lawmakers when they made the land deals, Choi added.

The two legislators came under heat in March after it was revealed that they or their families bought a plot of land in Hwaseong and Gwangmyeong, Gyeonggi Province, respectively, allegedly using insider information concerning large-scale state-funded land development projects nearby.

The police-led task force was launched in March in the wake of a massive land speculation scandal centered on the state housing developer, the Korea Land and Housing Corp. (LH).

It has since investigated 2,319 people in 583 cases, including 164 regional government employees, 80 central government officials and 64 LH workers.

Also among them were five lawmakers, including the two Yangs and Rep. Kang Gi-yun of the main opposition People Power Party.

The task force is currently analyzing materials seized last month in a raid on two companies linked to Kang and questioning a witness, according to Choi.

A total of 14 people have been placed under arrest, including a former aide of incumbent Interior Minister Jeon Hae-cheol and two regional council members. 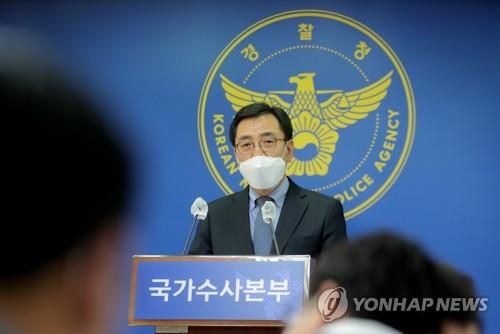