(ATTN: UPDATES with planned demolition of another monument in Pocheon and Seoul rallies in last 4 paras; ADDS photo; CHANGES dateline)

SEOUL/INCHEON, May 18 (Yonhap) -- A group of civic activists on Tuesday called for the removal of a stone monument related to former President Chun Doo-hwan in Incheon, west of Seoul, condemning him as the mastermind of a bloody massacre of pro-democracy demonstrators in the southwestern city of Gwangju in 1980.

Marking the 41st anniversary of the May 18 Gwangju Democratization Movement, the activists demanded that the stone monument erected by Chun in 1984 in memory of the 1950 Incheon landing operation during the Korean War be demolished because it has the former president's words and name on it. 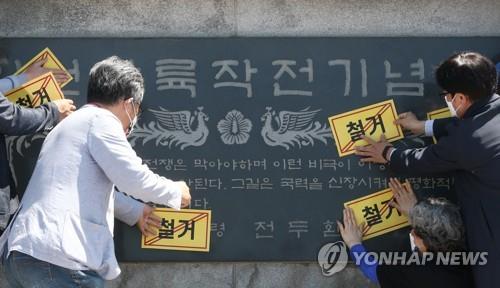 Chun wrote on the monument set up at the Memorial Hall for Incheon Landing Operation, "War must be prevented for any reason and this tragedy must never be repeated on earth again."

The activists urged the immediate demolition of the monument in a news conference at the memorial hall and placed demolition stickers on it.

"A stone monument of Chun still remains at the Incheon landing memorial hall, even though he was in charge of the Gwangju massacre and tried to conceal the truth," the activists said, asking the Incheon municipality to secure budget to tear down the monument.

Chun, a former Army general, seized power in a 1979 coup and served as president from 1980 to 1988. On May 18, 1980, the military cracked down on demonstrators protesting against Chun. The harsh quelling of the uprising left hundreds of people dead and thousands wounded.

Earlier this year, the municipality removed a signboard with letters inscribed by Chun from a Buddhist temple in the city at the request of civic groups. 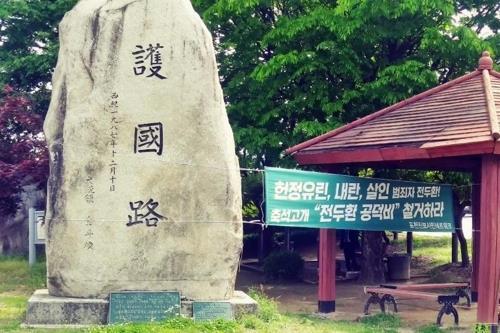 In Pocheon, about 50 kilometers northeast of Seoul, the municipal government and council and citizens have agreed to dismantle a memorial stone set up by Chun in 1987 to celebrate the construction of a local road.

Following the agreement reached at a Monday meeting, the municipality plans to secure a demolition budget and take relevant administrative measures.

The monument, which bears the name of the local road written in Chinese characters by Chun, has been the focus of civic protests around the May 18 uprising anniversary.

In Seoul, a number of civic and religious groups and social organizations held a string of rallies in front of Chun's residence in the city's western district of Yeonhui-dong on Tuesday, calling for his apology over the Gwangju massacre and the punishment of all people responsible.