SEOUL, May 20 (Yonhap) -- The United States is the world's leading technology and innovation hub, but it is not a leader in the high-tech supply chain, mostly relying on Asian countries for essential items, such as semiconductors and batteries for electric vehicles.

In the face of growing challenges from China, U.S. President Joe Biden wants to revitalize the domestic manufacturing capacity amid the global chip crisis and a looming shortage of batteries, and he is expected to welcome a series of announcements of massive investment plans by Korean companies ahead of and after his summit talks with South Korean President Moon Jae-in on Friday.

Moon is now in Washington for a four-day visit, and business leaders of South Korea's major conglomerates have embarked on their trips to the U.S. to attend various events aimed at promoting bilateral economic ties. 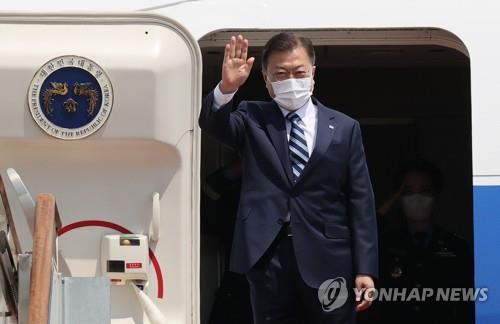 Some of the investments have already been announced as part of their strategic decisions made in response to the Biden administration's "Buy American" push and to better serve lucrative American clients, but fresh announcements with more details are expected to support Moon's agenda for North Korea and COVID-19 vaccine swap and technology transfer deals.

Industry watchers are paying keen attention to Samsung Electronics Co.'s plan to build a new semiconductor factory in the U.S. at a time when a global chip shortage is crippling the automotive industry and causing woes to other chip-dependent sectors.

Samsung, the world's largest memory chip producer and No. 2 foundry firm, is planning a 20 trillion won factory adjacent to an existing facility in Texas, and it is expected to soon finalize the proposal, according to industry sources.

With more chip plants, Samsung Electronics is likely to compete against foundry market leader TSMC and American chipmaker Intel Corp. for subsidies from the U.S. government, which proposed $50 billion in subsidies for chip manufacturing and research to rebuild the domestic chip production capacity.

Samsung was the only South Korean firm to join a White House online meeting last month to discuss global semiconductor shortages, and its foundry business chief is set to attend a virtual meeting to be hosted by U.S. Commerce Secretary Gina Raimondo later in the day. 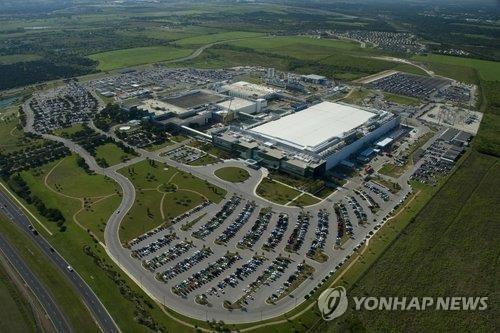 Last week, Hyundai Motor Group, South Korea's top automaking group, said it will invest 8.1 trillion won in the U.S. by 2025 to produce EVs, and it is expected to announce more details during Kong's U.S. trip.

The world's fifth-largest automotive group by sales said its flagship unit Hyundai Motor Co. and its affiliate Kia Corp. will build American-made EVs starting next year to tap deeper into the rising EV market, which will help its vehicles to be eligible for subsidies and tax incentives.

Hyundai, which debuted its first all-electric Ioniq 5, has a factory in Alabama, and Kia, which is set to release its first EV lineup EV 6, operates a production line in Georgia.

As lithium-ion batteries are a key component for EVs, LG Energy Solution Ltd. and SK Innovation Co., the two front-runners in the segment, are expected to draw up more concrete business plans to ramp up production capacity after reaching a settlement to end a two-year battery dispute last month.

The compromise, which came just before the April 11 deadline for a 10-year import ban on SK Innovation, cleared the stumbling block for its $2.6 billion factory in Georgia, which was under construction to supply EV batteries to Ford Motor and Volkswagen starting next year. 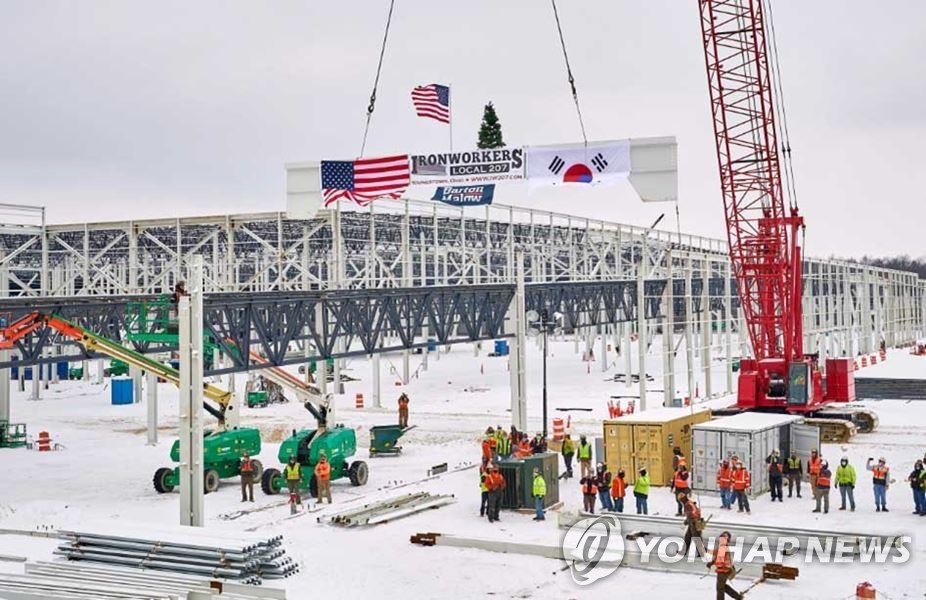 LG Energy operates a lithium-ion battery factory in Michigan and is building a new factory in Ohio through its joint venture with U.S. automaker General Motors, Ultium Cells, which will be completed in 2022.

Most recently, its joint venture announced a $2.3 billion investment plan to build a second EV battery factory in Tennessee.

Industry watchers are closely watching whether LG Energy will give more details about its investment or potential sites for new factories during the CEO's U.S. visit.

Its smaller rival SK Innovation is set to announce a battery joint venture with American automaker Ford Motor Co. later in the day to ensure a stable supply of batteries for electric vehicles, sources familiar with the matter said.

With the legal risk cleared, SK Innovation can complete the construction of its battery factory in Georgia later this year and go ahead with its plan to open a second factory next door in 2023.

As Moon and SK Chairman Chey plan to visit the Georgia plant during their U.S. visit later this week, some market watchers speculated that SK Innovation may unveil plans to double down its Georgia factory capacity to cater to the growing demand for EV batteries.

While the proposals by the Korean companies are expected to help rebuild the U.S. supply chain in the key technological sector and create jobs, their offshoring plans have raised concerns among their labor unions and industry watchers over potentially shrinking investment on home turf.

On Monday, Hyundai Motor's labor union criticized the management for unveiling the massive U.S. investment plan ahead of the bilateral summit without enough consultations with employees, calling for more investment on home soil.

"There are so many problems in the overseas production lines due to parts supply issues in the pandemic era. The company should step up its domestic production capacity for high-valued products," the labor union said in a statement. "We need new labor relations to develop the new technology and protect job security in the face of a rapidly changing industry landscape."