SEOUL, May 20 (Yonhap) -- The defense ministry said Thursday it will communicate more actively with residents around the U.S. THAAD missile defense base as clashes continue to happen every time supplies are brought onto the base.

Residents in the central county of Seongju have long opposed the U.S. Forces Korea (USFK) base in their town where the Terminal High Altitude Area Defense (THAAD) system is deployed, and they have clashed with police when the ministry brought construction equipment and other items for troops onto the base.

On Thursday, the ministry was also transporting construction materials and daily necessities onto the base amid strong protests by the citizens. It was the fourth such shipment this month alone.

"The materials and equipment we are to transport are to improve facilities on the base to guarantee basic living conditions of the Korean and American service members," ministry spokesperson Boo Seung-chan told a regular briefing.

"We've been communicating with local governments, religious groups and other entities concerned. We will try to find out if there is more we can do and to boost consultations further with the people there," he added.

Ministry officials also stressed that the shipment is not meant to upgrade or strengthen the unit, and it will continue to be transparent in dealing with the THAAD base issue.

But the residents have claimed that those moves are part of preparations for officially deploying the THAAD battery, and vowed to hold a protest in front of the presidential office Cheong Wa Dae on Friday to condemn the government and the United States.

The U.S. base was established in 2017, and the current deployment is temporary, pending the results of an environmental assessment study now under way.

As an integral part of the U.S.-led missile defense system, THAAD is designed to shoot down short-, medium- and intermediate-range ballistic missiles at a high altitude in their terminal phase, using a hit-to-kill method.

Seoul and Washington have stressed that the system aims to better cope with the growing missile threats posed by North Korea. 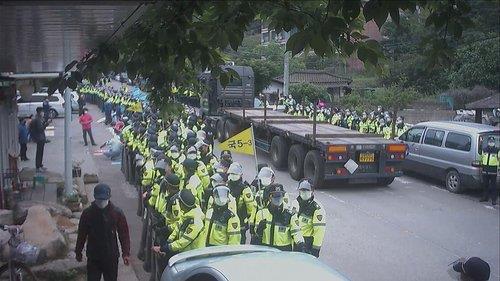 Gov't vows active communication with residents near THAAD base

Gov't vows active communication with residents near THAAD base