Trading volume was moderate at about 754 million shares worth some 13 trillion won (US$11.5 billion), with losers outnumbering gainers 516 to 346. 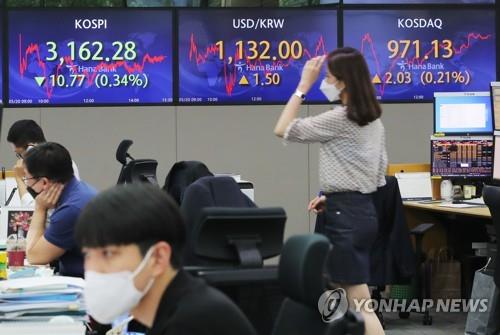 After a lackluster start, the KOSPI continued to lose ground amid foreign and institutional selling.

Stocks fell tracking the decline in U.S. stocks that was largely caused by the Federal Reserve's minutes suggesting the possibility of an earlier-than-expected tapering amid signs of a fast economic recovery.

"Local stock prices fell after the Fed commented on the possibility of adjusting the pace of its asset-buying program for the first time in its April minutes," Shinhan Investment Corp. analyst Kim Da-mi said.

The local currency closed at 1,132 won against the U.S. dollar, down 1.5 won from the previous session's close.

Bond prices, which move inversely to yields, closed lower. The yield on three-year Treasurys added 0.4 basis point to 1.103 percent, and the return on the benchmark five-year government bond rose 1.7 basis points to 1.642 percent.