Friday's daily caseload compares with 646 on Thursday, 654 on Wednesday and 528 on Tuesday.

There were six additional virus deaths, raising the total to 1,922.

Currently, the greater Seoul area, home to more than half of the country's 52 million people, is under Level 2 social distancing, the third highest in the five-tier scheme, while the rest of the country is subject to Level 1.5 distancing. Gatherings of five or more people are banned nationwide in principle. 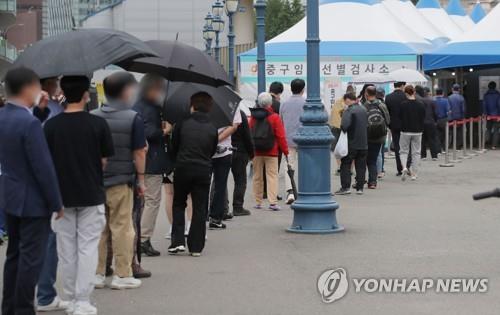 The country has reported more than 1,140 cases of variant strains of COVID-19 from Britain, South Africa, Brazil and India, with southern cities, such as Ulsan, reporting the most variant cases.

As of Thursday, 1,482,842 people, or 2.9 percent of the country's population, have been fully vaccinated, receiving both doses of two-part vaccines.

Of the locally transmitted cases, 171 came from Seoul, and the surrounding Gyeonggi Province accounted for 161.

The total number of people released from quarantine after making full recoveries was 124,158, up 499 from a day earlier.