"We agree to work together to improve the human rights situation in the DPRK and commit to continue facilitating the provision of humanitarian aid to the neediest North Koreans," read the document issued in the wake of their White House summit. DPRK is the abbreviation of the communist nation's official name, the Democratic People's Republic of Korea.

The leaders also reaffirmed their commitment to previous inter-Korean and Washington-Pyongyang agreements including the Panmunjom Declaration and Singapore Joint Statement, both signed in 2018. 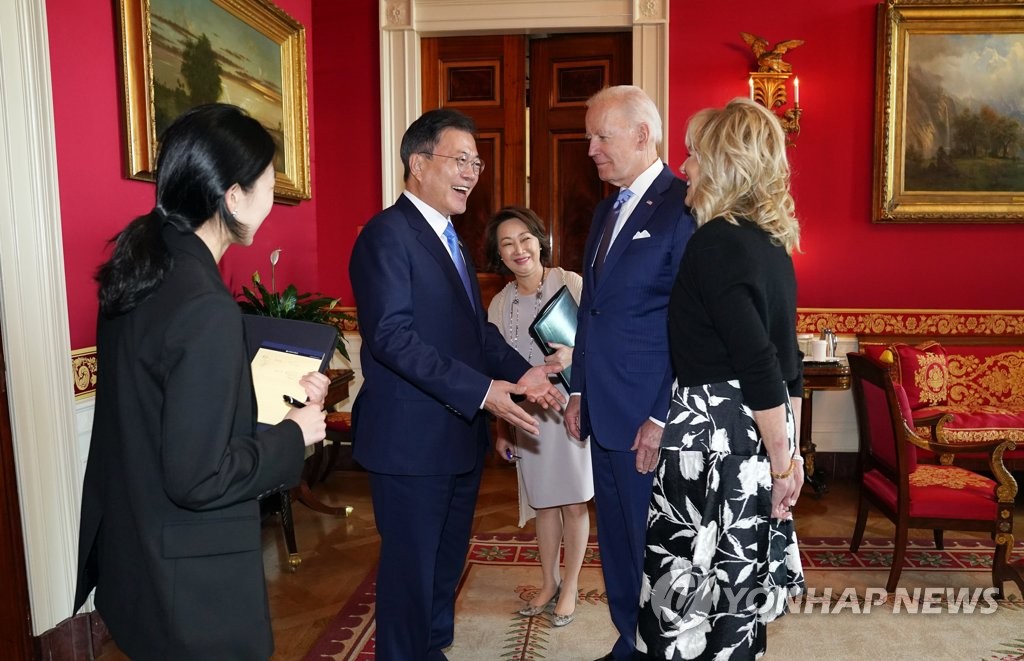 Moon has stressed the need for the Biden administration to inherit the Singapore accord between his predecessor Donald Trump and North Korean leader Kim Jong-un.

"We also reaffirm our common belief that diplomacy and dialogue, based on previous inter-Korean and U.S.-DPRK commitments such as the 2018 Panmunjom Declaration and Singapore Joint Statement, are essential to achieve the complete denuclearization and establishment of permanent peace on the Korean Peninsula," the leaders stated in writing.

They agreed on the "fundamental importance" of trilateral cooperation involving Japan in dealing with North Korea, protecting prosperity and bolstering the rules-based order.

Moon reiterated Seoul's position that it "acknowledge the importance of open, transparent and inclusive regional multilateralism including the Quad." The Quad refers to the Quadrilateral Security Dialogue, an informal strategic alliance involving the U.S., Japan, India and Australia.

The leaders agreed to work together to increase the resilience of global supply chains in such high-tech sectors as semiconductors, eco-friendly electric vehicle batteries, pharmaceuticals and strategic and critical materials.

"We also agree to work together to increase the global supply of legacy chips for automobiles, and to support leading-edge semiconductor manufacturing in both countries through the promotion of increased mutual investments as well as research and development cooperation," it read.