WASHINGTON/SEOUL, May 22 (Joint Press Corps-Yonhap) -- South Korean President Moon Jae-in's summit meetings with U.S. President Joe Biden in Washington on Friday presented contrasting appearances from those held about a month ago between the leaders of the United States and Japan, officials said.

The most noteworthy differences were the length of the summit meetings and the lunch menu. 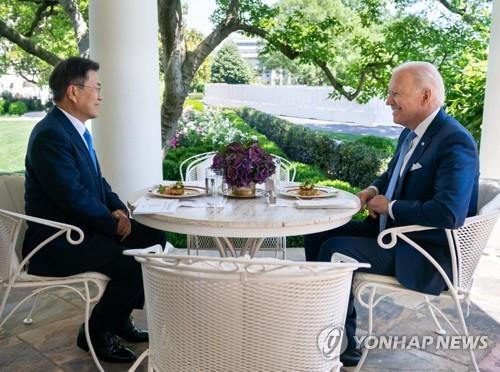 Moon and Biden held 171 minutes of one-on-one, small group and expanded summit meetings, about 20 minutes longer than the April 16 meetings between the U.S. president and Japanese Prime Minister Yoshihide Suga.

The Moon-Biden meetings continued about one hour longer than scheduled, and the South Korean leader stayed at the White House for five hours and 40 minutes in total.

In the one-on-one meeting held for 37 minutes over lunch, Maryland crab cakes were served as the main course, according to Chung Man-ho, Moon's senior secretary for public communication.

"The U.S. side prepared Maryland crab cakes as the main lunch menu in consideration of President Moon's preference for seafood, and President Biden shared the same menu," said Chung.

It is believed that the U.S. side may have given careful consideration to the summit lunch menu because crab cakes are a famous food among Americans and Moon's dietary preference was taken into account. 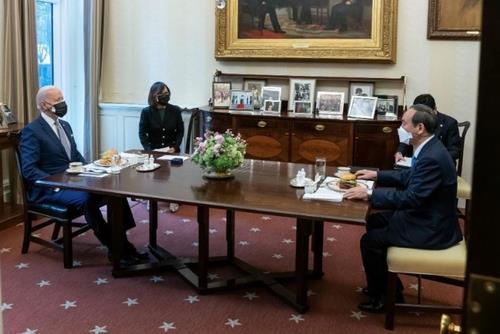 In addition, Moon and Biden met without wearing a mask, whereas the U.S. president wore a double mask as an extra precaution against COVID-19 during his meeting with Suga last month.

Earlier on May 13, the U.S. authorities issued a new guideline saying fully vaccinated people no longer need to wear a face mask in most cases. Moon and Biden are both vaccinated.