Earlier in the day, he flew to Atlanta from Washington, D.C. to make a brief visit to a Georgia plant construction site of SK Innovation Co., a South Korea-based battery maker. It marked Moon's first overseas travel since the outbreak of the COVID-19 pandemic.

He said he is returning home with "better-than-expected" results from his first summit with Biden held at the White House on Friday.

He was accompanied by a group of South Korean business leaders, who announced plans to invest a combined total of US$39.4 billion in the U.S. They included the chief executives of Samsung Electronics, LG Energy Solution and SK innovation.

Moon said he has also received "surprise gifts" from the U.S. He cited Biden's announcement on coronavirus vaccine provision and pick of a new special envoy on North Korea. 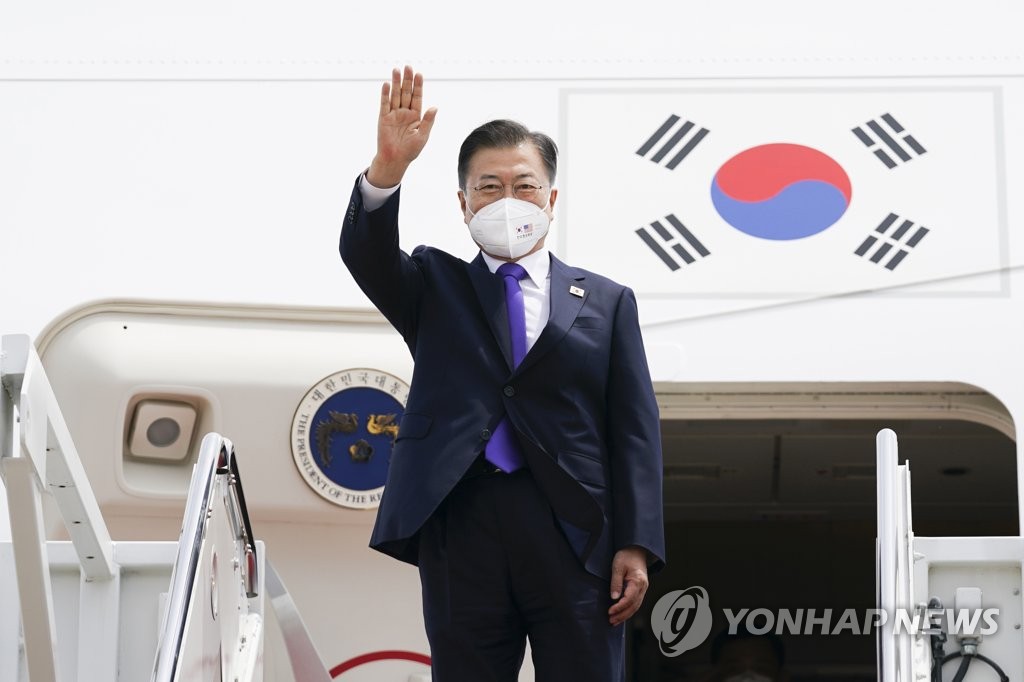 "The outcome of the talks couldn't have been better," Moon wrote on his social messaging accounts. "It was better than expected."

The U.S. tried to understand South Korea's position on the pending issues and reflect it in the summit agreement, Moon added.

The U.S. decision to provide South Korea with coronavirus vaccines, plus a bilateral vaccine partnership, was "literally a surprise gift," he noted.

Biden made public a plan to offer "full vaccinations" for all 550,000 South Korean troops.

He pushed ahead with the decision despite an internal backlash, as lots of American people have yet to be inoculated and there are many other nations in more urgent need of vaccines, according to Moon.

Biden, however, placed a "special" emphasis on the importance of the Seoul-Washington alliance, he added.

Another surprise gift was the announcement of Sung Kim, a veteran Korean American diplomat who is well versed in Korean Peninsula situations and negotiations with North Korea, as special envoy on North Korea, Moon wrote.

Kim, former U.S. ambassador to Seoul, played a role with regard to the 2018 Singapore summit deal between the U.S. and North Korea.

The choice of him apparently represents Washington's message to Pyongyang that it is ready for dialogue, as Kim can talk with North Koreans without an interpreter, according to Moon. He was on his way back to Seoul following a four-day trip to the U.S. capital.

(LEAD) Moon leaves U.S. after visit for summit with Biden

(LEAD) Moon leaves U.S. after visit for summit with Biden