SEOUL, May 25 (Yonhap) -- K-pop rookie Enhypen has landed on Billboard's main albums chart this week with its latest EP, making its first appearance on the prominent U.S. music chart in just over six months since its debut.

"Border: Carnival," the boy band's second EP released on April 26, ranked No. 18 on the latest Billboard 200 chart released by Billboard on Monday (U.S. time). The weekly chart will be officially updated the next day.

The ranking is by far the highest achieved by a K-pop act's album dropped this year.

The seven-piece act is also the only K-pop group that has made it on Billboard 200 among those who made their debut last year.

Enhypen debuted in November last year through "I-Land," a globally televised audition show co-produced by entertainment giant CJ ENM and K-pop powerhouse Hybe. The program has helped the boy band expand its fan base across the world from the start. 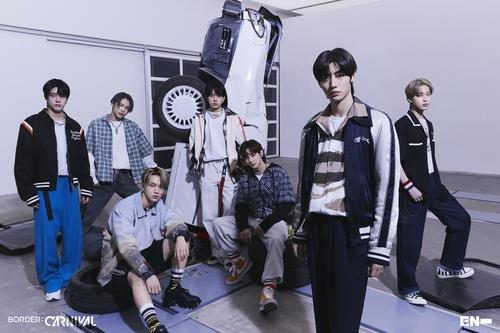 K-pop rookie Enhypen debuts at No. 18 on Billboard 200 with latest EP

K-pop rookie Enhypen debuts at No. 18 on Billboard 200 with latest EP