SEOUL, May 26 (Yonhap) -- On the banks of the Han River, the lifeline of Seoul, a middle-aged woman clung to a portrait of a young man and wept uncontrollably.

"This 'ajumma' will reveal (the truth) no matter what," she said, using the Korean term for a married and typically older woman. "Poor Jeong-min," she cried.

Until recently, the woman had never heard of Son Jeong-min, a 22-year-old medical school student who was found dead in the river on April 30. His existence only became known to the nation after news of his April 25 disappearance and subsequent death made national headlines. 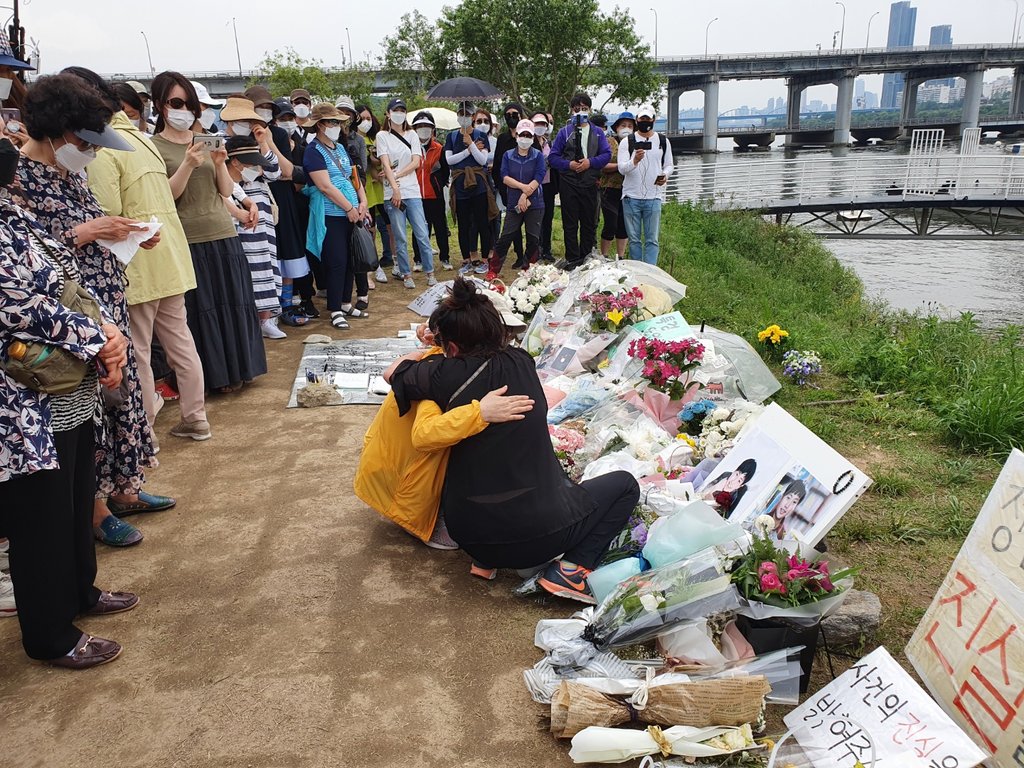 Still, the woman from Gangwon Province took the first bus to Seoul on Sunday morning to join dozens, at times hundreds, of people mourning Son's death at the riverside park.

"It's such a shame this happened to a young man who should have carried the future of this country on his back," she said.

Son's case has gripped the nation for a month amid sorrow that the future doctor could have had a promising life had he not come to Banpo Han River Park on April 24 and gotten drunk there with his friend. Every update in the police investigation has been urgently reported by the national press.

The circumstances surrounding Son's death have baffled the nation for a number of reasons, not the least of which is the absence of security camera footage from the section of the park where Son and his friend sat and drank from 11 p.m. on April 24 until 2 a.m. the next day before falling asleep.

The friend reportedly woke up around 4:30 a.m. and went home thinking that Son had gone home because he could not be seen. Shortly afterward, he discovered the phone he was carrying was not his but Son's and presumed his would be with Son. That phone has yet to be found. 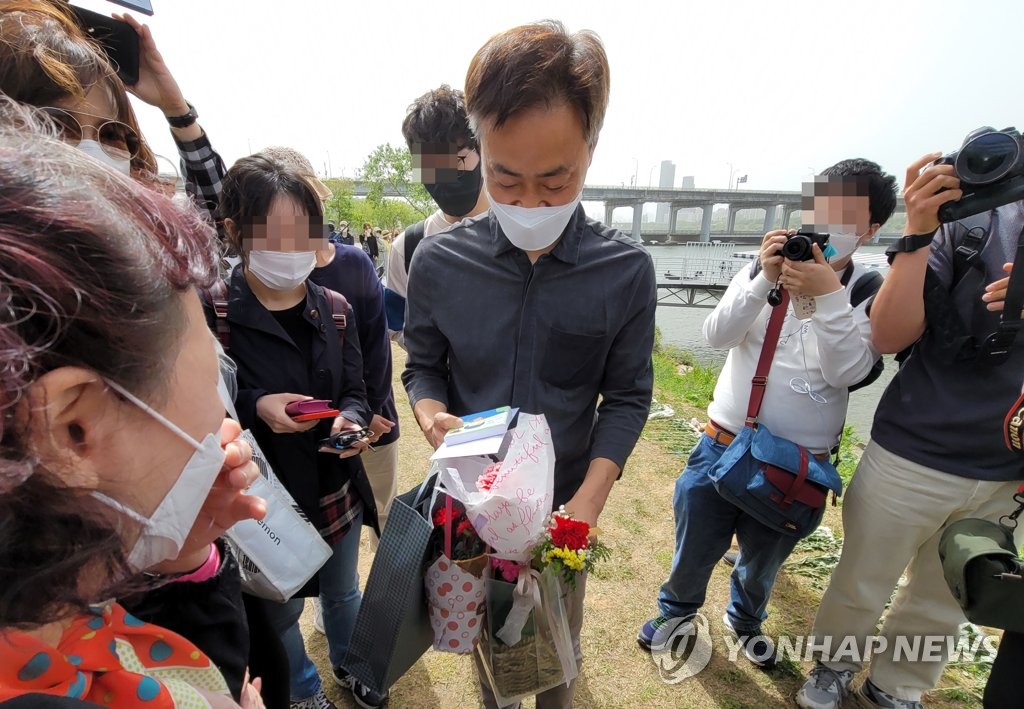 The friend returned to the park with his parents early in the morning. By that time, Son had disappeared.

Five days later, a civilian diver recovered Son's body from the water. Two cuts were spotted behind his left ear, each the length of about two-thirds of a finger. The National Forensic Service conducted an autopsy on the body and presumed Son had died by drowning, but it drew no links between the cuts and his death.

Public mistrust in the authorities' findings has run high, with a growing number of rumors and speculations circulating online.

Many have raised suspicions about Son's friend, citing reports he threw away the shoes he was wearing at the time of Son's disappearance and that he returned to the park with his parents in the early morning before informing Son's parents that their son had gone missing.

Others have embraced conspiracy theories, suggesting that the friend's father or relatives are in positions of power and influencing the outcome of the police probe.

The friend's lawyer refuted the suspicions in a statement last week, the first time the friend's side had commented publicly on the case. 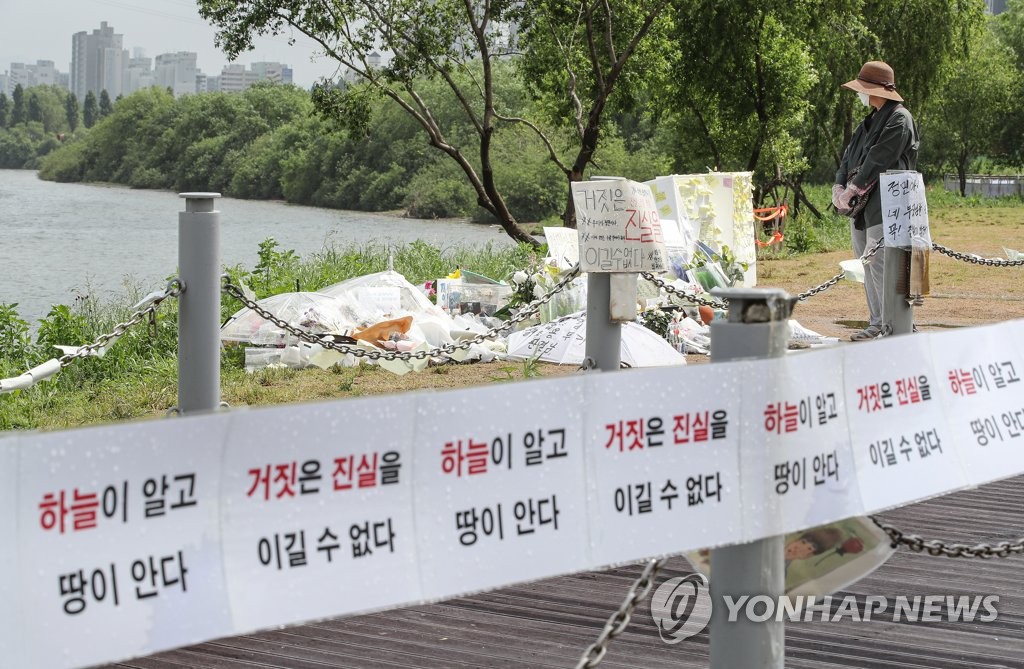 The shoes were thrown away because they were worn and covered in vomit, the lawyer said, while the parents went to the park out of concern for Son's safety and because they did not want to bother his parents so early in the morning.

"There are absolutely no so-called powerful figures" in the friend's family, the lawyer added, saying the father's job is "a far cry" from powerful people and the mother has been a full-time homemaker ever since she married.

The statement did little to quell people's suspicions.

On Tuesday, a group of people gathered outside the police station handling Son's case. They demanded a thorough investigation, including by booking the friend as a suspect.

"This past month's probe, and especially the early investigation, was very inadequate and led to a waste of valuable time in determining the truth," said a member of the online community, which calls itself "People Seeking the Truth of the Banpo Han River Case."

"Due to the half-hearted manner in which the investigation is proceeding, people are afraid the probe will be shoddy and even suspect the police may be trying to cover up the case," the person added. 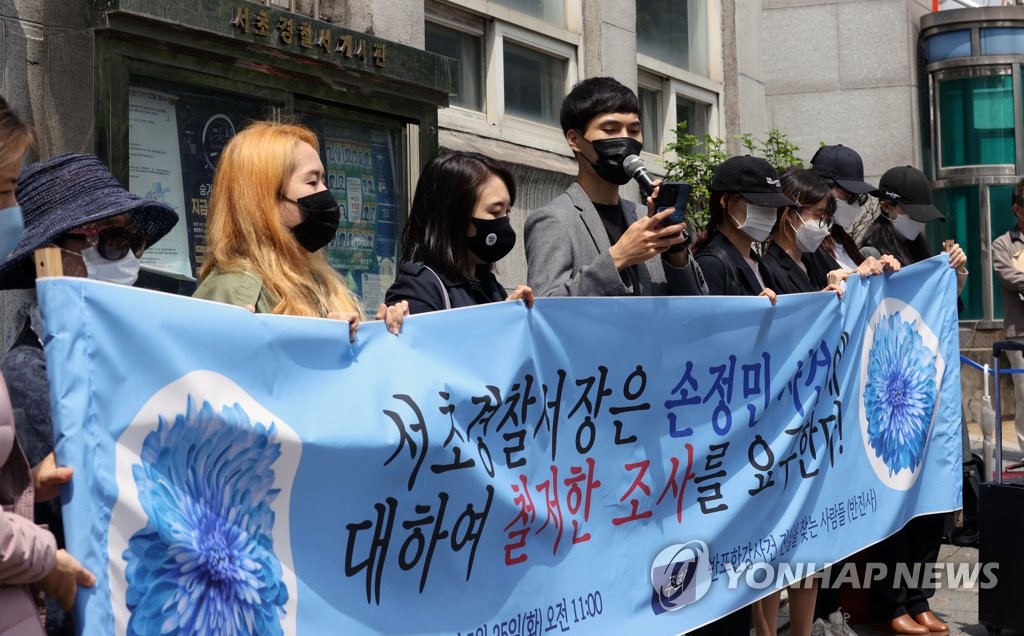 On Cheong Wa Dae's website, a petition calling for truth in Son's case had collected more than 450,000 signatures as of late Tuesday, about three weeks after it was posted. Any petition that collects more than 200,000 signatures within 30 days mandates a response from the government.

The petition over Son's case, however, is still being reviewed for public disclosure in accordance with the website's rules. Only once it is approved for disclosure will the government be required to provide a response.

Above all, Son's father has stood at the center of the mounting campaign for truth. He has spoken in front of cameras for TV and used his personal blog to voice his suspicions and grief.

"It feels like my son will open the door any minute, but now I can't see his smiling face. Why?" he wrote recently. "The question never leaves me."

As for the probe, police gave their latest update Tuesday, saying the National Forensic Service had analyzed Son's socks and revealed the soil staining them had similar properties to the ground 10 meters into the river away from the bank.

Asked if the soil was stepped on or floating in the water before getting on the socks, a police official said it was "still difficult to say conclusively." 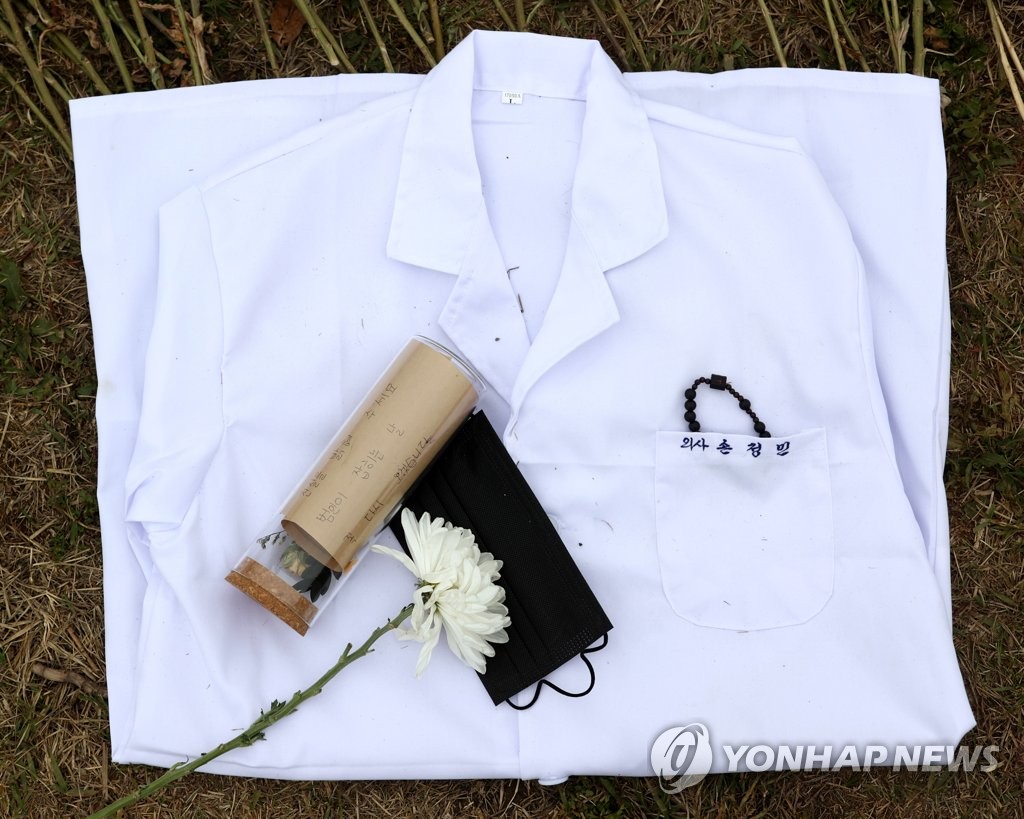