SEOUL, May 26 (Yonhap) -- POSCO, the world's fifth-largest steelmaker by output, on Wednesday broke ground for a plant in South Korea to extract lithium hydroxide, a key material for electric vehicle (EV) batteries.

The ceremony came nearly seven weeks after POSCO's board of directors approved the plan to build a plant in the southern industrial city of Gwangyang by 2023.

The plant will have an annual production capacity of 43,000 tons of lithium hydroxide, which is enough to manufacture about 1 million electric vehicles, according to POSCO. 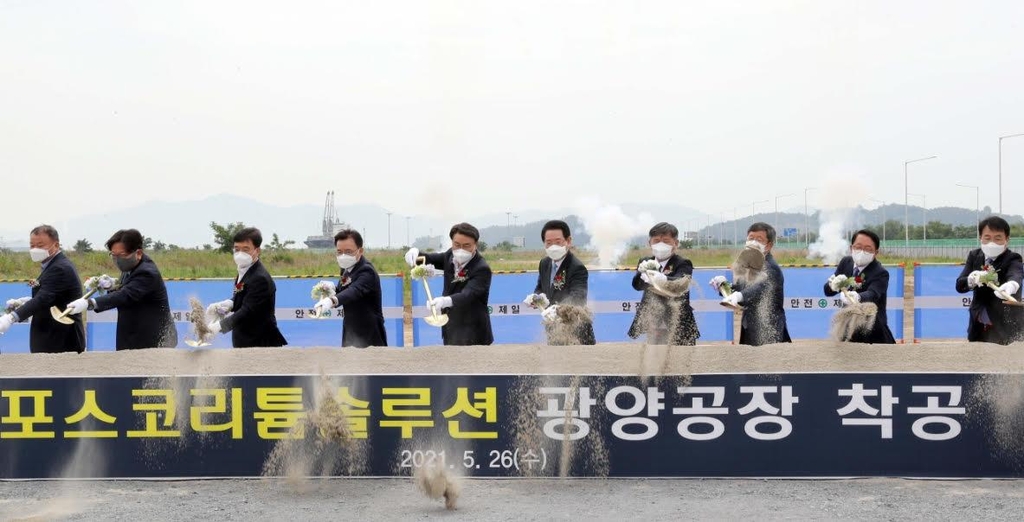 POSCO said it will import spodumene from Australia's Pilbara Minerals, from which lithium hydroxide will be extracted at the plant.

Separately, POSCO said it will begin building a plant within this year near the Salar del Hombre Muerto salt lake in northern Argentina. The plant will have an annual production capacity of 25,000 tons of lithium.

Last week, POSCO signed a deal to buy a 30 percent stake in the Ravensthorpe Nickel Operation in Australia for US$240 million.

Under the deal with Canadian miner First Quantum Minerals Ltd., POSCO will be provided with a long-term offtake agreement for 7,500 tons of nickel in mixed nickel-cobalt hydroxide precipitate per year produced at Ravensthorpe, beginning in 2024.

In February, POSCO Chemical Co., an affiliate of POSCO, announced its plan to invest 275.8 billion won ($248 million) to expand its production capacity of cathodes, a key component for EV batteries.

POSCO Chemical said the plant in Gwangyang will boost its annual production capacity of cathodes to 100,000 tons by 2023, which is enough to manufacture about 1.1 million electric vehicles equipped with 60 kilowatt-hour battery packs.