SEOUL, May 27 (Yonhap) -- South Korea has signed a U.S.-led international program to send humans to the moon again and further explore Earth's only satellite, the science ministry said Thursday.

Science Minister Lim Hye-sook signed the Artemis Accords as a follow-up on an agreement reached at a recent bilateral summit in Washington, becoming the 10th signatory to the pact, the ministry said.

The Artemis Accords is an international agreement among governments participating in the Artemis Program, a U.S.-led effort to return humans to the moon by 2024, and to ultimately expand and deepen space exploration. 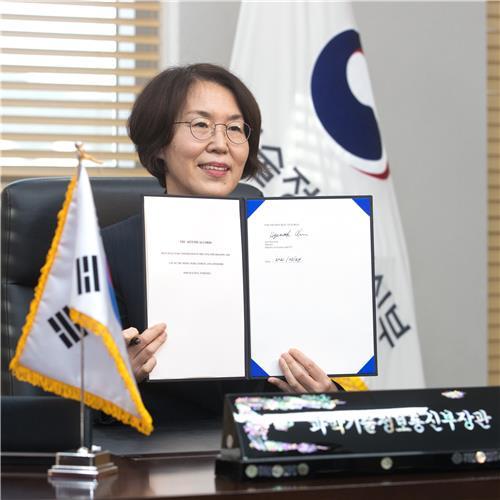 The U.S, Japan, Britain, Italy and four other countries signed the agreement in October 2020. Ukraine joined the program later.

"It is important to explore space in a transparent and responsible way through international cooperation," Lim said. "South Korea's signing is expected to help expand cooperation among the signatories in space exploration."

The science ministry said South Korea will further expand its cooperation with America and participate in a range of areas in the Artemis Accords and other space exploration programs.

In particular, South Korea has been joining hands with the U.S. National Aeronautics and Space Administration (NASA) to develop a lunar orbiter set to blast off in August 2022.

South Korea, a relative latecomer to the global space race, has been working on a lunar orbiter program since 2016.
(END)