SEOUL, May 27 (Yonhap) -- President Moon Jae-in said Thursday that South Korea needs to maintain expansionary fiscal policy for the time being despite a hike in national debts attributable to the response to COVID-19.

He emphasized that the role of state budget spending is important amid the crisis, speaking at the outset of an annual meeting on fiscal strategy. It was convened to review fiscal policy, set the direction of next year's budget plans and discuss midterm fiscal strategy for the period of 2021-25.

He said that it is true that South Korea's national debts have fast increased in the process of handling the pandemic-led crisis but added that its fiscal situation remains relatively sound. 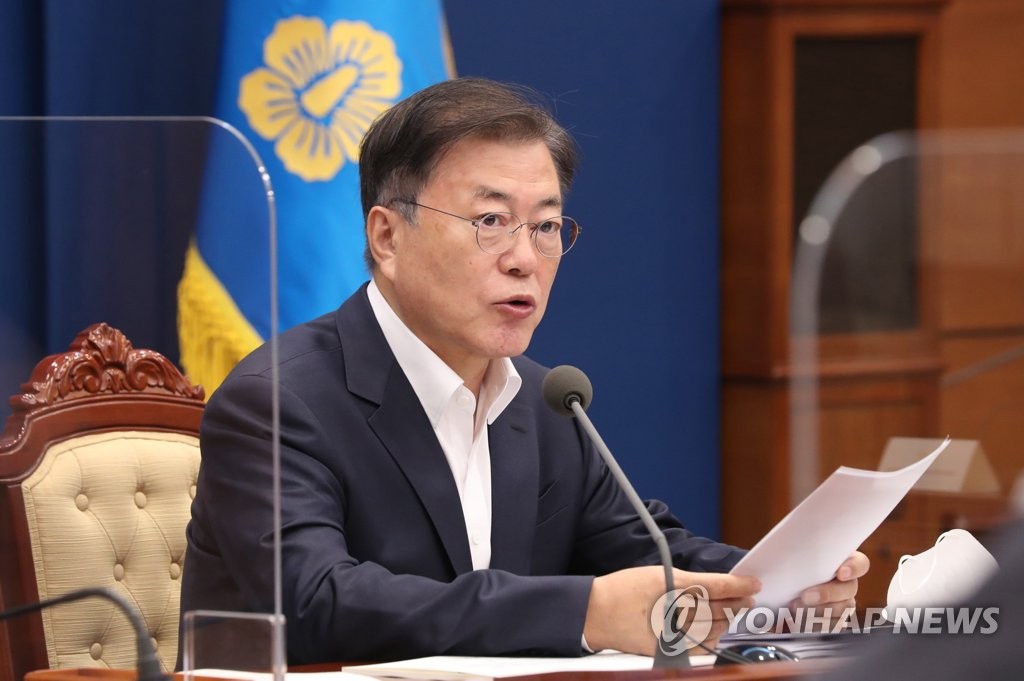 The president took note of disputes over whether Asia's fourth-biggest economy should keep the current mode of operating fiscal policy in an expansionary way.

"I think we need to maintain an expansionary fiscal policy stance at least until next year to ensure a strong rebound in the economy and tackle the gap (widened by the coronavirus)," he said.

He referred to an outlook that South Korea's gross domestic product (GDP) could grow by 4 percent, or more, in 2021 for the first time in a decade.

However, ongoing economic recovery is only half satisfactory, with the job market in trouble and the polarization of income and assets palpable, he added.

He did not mention the possibility of the government seeking another batch of supplementary budgets, while leaving the door open for additional budget spending based on increased tax revenues.

He instructed the government to gear up to introduce rules for fiscal soundness in 2025 as scheduled.

Next year's national budget may surpass the 600-trillion won mark, up from a record 558-trillion won budget for this year.

Last year, the finance ministry unveiled a proposed fiscal rule that would limit the country's debt to 60 percent of its GDP or its fiscal deficit to 3 percent starting in 2025. The new rule is subject to parliamentary approval.

Other participants in the 2021 National Fiscal Strategy Meeting included Prime Minister Kim Boo-kyum, Finance Minister Hong Nam-ki and Yun Ho-jung, floor leader of the ruling Democratic Party (DP). The DP's chief Song Young-gil was supposed to attend the session but skipped it due to indirect contact with a coronavirus-infected person.