SEOUL, May 27 (Yonhap) -- South Korea on Thursday launched an innovative pilot program to help non-priority people receive AstraZeneca COVID-19 vaccines made available from canceled appointments, but the so-called leftover vaccines can hardly be found in reality, many citizens said.

The Korea Disease Control and Prevention Agency (KDCA) began the test operation of the search and reservation system for AstraZeneca vaccines available from appointment no-shows through the country's largest web portal Naver and top mobile messenger KakaoTalk at 1 p.m.

The test operation was launched as authorities started to offer AstraZeneca shots to ordinary South Koreans from age 65 to 74, one of the priority groups, on the same day. The online search system is aimed at minimizing the waste of remaining doses from missed appointments amid weak public trust in AstraZenaca vaccines. One AstraZeneca vaccine bottle contains 10 doses. If they are not used within up to six hours after opening, the remaining doses should be discarded. 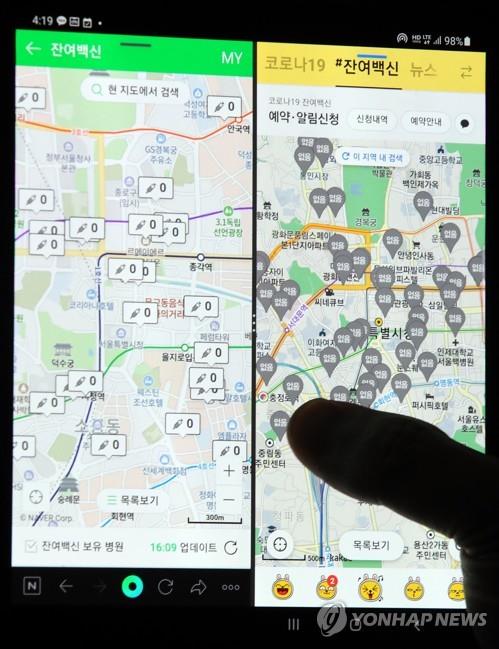 Anybody older than 30 who is not yet officially eligible to receive vaccine shots due to limited national supplies can search for leftover doses via Naver or KakaoTalk and sign up to receive them during the day. The KDCA offers the real-time information on vaccination reservations and no-shows to the two companies.

Contrary to expectations, however, many citizens across the country complained about the difficulties of finding any leftover vaccines even several hours after the launch of the pilot program.

Furthermore, the KakaoTalk search and reservation service was interrupted for a few hours due to a system failure on its launch day.

Seoul citizens searched for vaccines available from missed appointments on late Thursday afternoon, but were only told that all hospitals and vaccination centers in the capital and surrounding Gyeonggi Province had not a single dose left over.

The situations were similar in other regions.

"I thought it would be easy to find leftover vaccines due to many people's fears of vaccination side effects, but there was not a single leftover dose available today," said a 39-year-old citizen in the southeastern city of Pohang.

Some people reported spotting the existence of leftover vaccines, though briefly.

A 34-year-old resident in Daegu, southeast South Korea, said he happened to find a hospital declaring 10 leftover doses available for reservation, but they had all disappeared one hour later while he was pondering whether to get the vaccine.

In comments on online news stories and social media sites, too, almost all people said they want to get vaccinated but can hardly find any leftover vaccines.

The pilot program will run for two weeks and will officially kick off on June 9.

"Those who made reservations for the first day of vaccination seem to have a strong determination to get inoculated and posted a very low no-show rate," said an official at a Busan hospital, adding his hospital recorded not a single no-show appointment Thursday.

Some officials attributed the scarcity of leftover vaccines to overbooking of appointments. 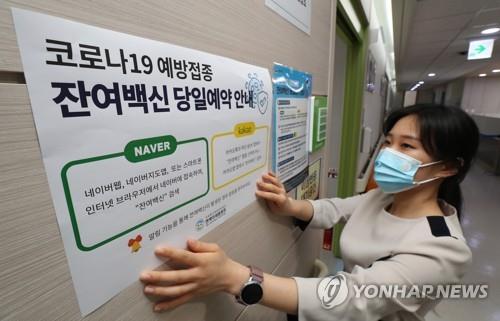 Citizens complain of scarcity of leftover vaccines from missed appointments

Citizens complain of scarcity of leftover vaccines from missed appointments