SEOUL, May 28 (Yonhap) -- A delivery workers union has suggested a solution to a highly publicized dispute over parking rules between them and residents of a mega apartment complex in eastern Seoul.

In a press release on Thursday, the union said a similar conflict at another complex, also in eastern Seoul, was resolved after the two sides agreed on a compromise that allowed delivery workers to use ground-level parking spaces but demanded they run at a speed of 10 kilometers per hour or slower.

Both parties agreed on the temporary measure, while continuing their discussions to eventually set up a delivery system using underground parking spaces.

The agreement also requires workers or logistics companies to provide compensation for any accident inside the complex that is caused by speed limit violations and bans the serving of residents if such an accident happens.

The union welcomed the news, calling the solution "a reasonable alternative for the safety of both the residents and delivery workers."

"We sincerely hope a solution satisfying both sides can be hammered out through consultations at many more apartment complexes," the union said.

Earlier this month, a planned strike by unionized delivery workers was postponed indefinitely at the last minute, following the government's offer to address the matter through a formal consultative body, consisting of the land ministry, the labor ministry, logistics firms and the union. The workers had announced a partial strike in protest of a ban on ground-floor parking.

The dispute began after residents of the 5,000-unit complex required delivery trucks to use only underground parking spaces, citing concerns about their safety.

Delivery workers have balked at the rule, arguing that their vehicles cannot enter the garage due to the maximum height clearance, forcing them to use carts to move packages from the complex's entrance to customers' doors, which the workers complained was time consuming and posed health risks to them. 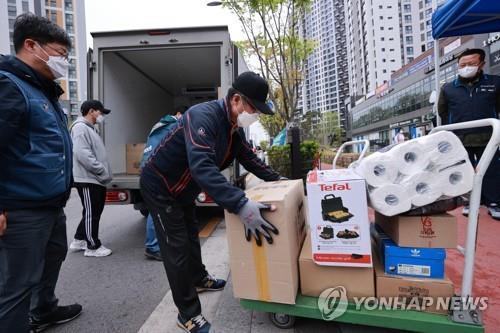