SEOUL, May 30 (Yonhap) -- A growing number of South Koreans support replacing the current military draft with a volunteer system, a survey showed Sunday.

According to the Gallup Korea poll, 43 percent of respondents were in favor of switching to the volunteer military system, while 42 percent were in favor of maintaining the status quo. The remaining 15 percent declined to answer.

The law requires all able-bodied South Korean men to serve about two years in the military. Women are exempted from mandatory service and allowed to volunteer as commissioned or noncommissioned officers. 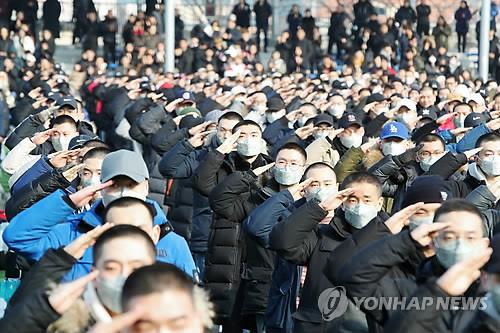 According to Gallup, the gap between supporters of voluntary service and conscription was larger in 2016 at 35 percent and 48 percent, respectively.

The latest survey was conducted on 1,003 men and women aged 18 or older from Tuesday to Thursday.

Both men and women were almost evenly split between supporters of the two systems, with men preferring the volunteer military system 48 percent to 44 percent and women 38 percent to 39 percent.

Asked which of the genders should be drafted, 47 percent of the respondents said only men, while 46 percent said both women and men.

The divide was similar across all age groups except those in their 20s, whose support for drafting both women and men was much higher at 51 percent compared to 37 percent for drafting only men.

The survey had a margin of error of 3.1 percent at the 95 percent confidence level.