SEOUL, June 1 (Yonhap) -- The defense ministry said Tuesday it will directly investigate the death of an Air Force officer who died of apparent suicide, allegedly after suffering harassment by a colleague, amid criticism the military failed to properly respond to the victim's call for support.

In March, the female master sergeant stationed in the western city of Seosan was sexually harassed by the man surnamed Jang inside a car on their way back to the base after a private gathering that she was forced to attend, according to the officials.

She then reported the case to the authorities the following day, but the military allegedly failed to take appropriate steps to protect the victim.

Jang, as well as his family members and senior officers, had instead tried to cover up the case and persuade her to drop the complaint, according to the bereaved family members.

After taking two months off, she was transferred to another base by her application, but she was found dead at her residence inside the base late last month.

The ministry said the decision was aimed at securing "transparency and fairness" in the probe, adding that the investigation team will also look into whether the Air Force appropriately handled the case when it was first reported.

Air Force Chief of Staff Gen. Lee Seong-yong also offered his condolences to the victim's family, apologizing over the incident and vowing to conduct an in-depth probe.

The father of the victim recently posted a petition on an online bulletin of the presidential office Cheong Wa Dae and called for the truth to be revealed, claiming that members of her unit had urged her to reach a settlement with the perpetrator without taking due protective measures for his daughter.

The Military Human Rights Korea, an advocacy group, submitted a petition to the defense ministry on Tuesday and called for immediately detaining the man and punishing those who tried to manipulate and cover up the case. 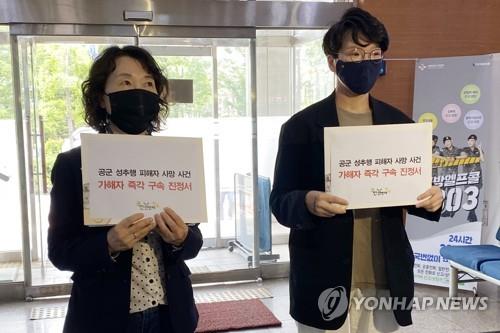 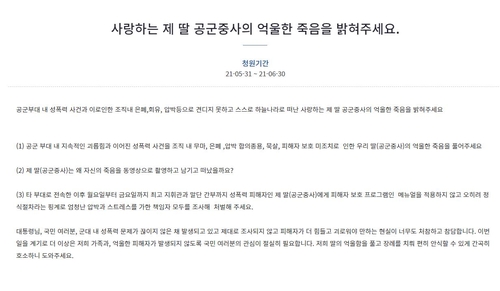