SEOUL, June 1 (Yonhap) -- South Korea will continue to play a role as a "bridge" between advanced and developing countries to strengthen global responses to climate change after this week's conclusion of a Seoul summit on the issue, the foreign minister said Tuesday.

Chung Eui-yong made the remarks, noting the virtual Partnering for Green Growth and the Global Goals (P4G) summit, hosted by Seoul on Sunday and Monday, helped muster the collective will against climate change and highlighted an "inclusive green recovery" from COVID-19 to overcome environmental challenges.

"This P4G summit carries a great meaning in that our country has led the international climate response while playing an important role as a bridge between advanced countries and developing countries that have different conditions and views," Chung told a press briefing on the summit outcome. 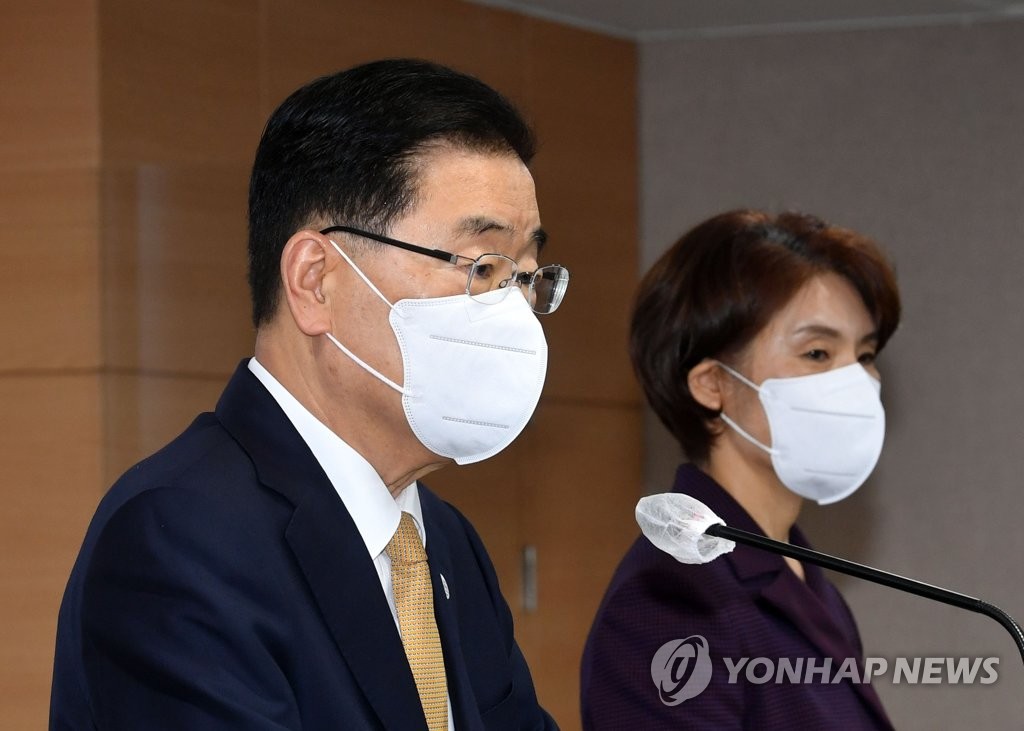 "Our government will actively join international efforts for the success of the U.N. climate change conference slated for November and for the goal of reaching carbon neutrality by 2050," he added.

Asked whether Seoul can foster global cooperation on climate change amid a rising Sino-U.S. rivalry, Chung stressed that both the United States and China joined the Seoul summit, albeit not party to it, and that Beijing, a top carbon emitter, even partook in the summit declaration that called for tougher climate action.

Chung cast the Seoul Declaration of the latest and second P4G summit as a culmination of Seoul's diplomatic efforts on "inclusiveness."

The declaration, adopted at the close of the summit, underscored the leaders' resolve to pursue a "green" economic recovery from the pandemic through an "inclusive" process that takes into account "different national circumstances, as well as socially and environmentally vulnerable communities."

At the same briefing, Environment Minister Han Jeoung-ae said a key outcome of the Seoul summit is the leaders' commitment to support a green recovery by developing countries and strengthen climate action toward the goal of carbon neutrality.

Meanwhile, Chung expressed regrets over the "mistake" of using the map of Pyongyang in a video introducing the venue of the climate summit in Seoul, noting the need for a "concrete" examination into it.

The map of the North Korean capital appeared in the video shown at Sunday's opening ceremony of the P4G summit.

The Seoul Summit brought together more than 60 leaders and other top government officials and heads of international organizations. It marked the second P4G summit following the first held in Copenhagen in 2018. Colombia plans to host the next P4G summit in 2023.