It was unprecedented for Moon to have a separate meeting with the representatives from the so-called Big Four groups at Cheong Wa Dae since his inauguration in May 2017.

The attendees were SK Group Chairman Chey Tae-won, Hyundai Motor Group Chairman Chung Eui-sun and LG Group Chairman Koo Kwang-mo. Samsung Electronics Vice Chairman Kim Ki-nam, who is in charge of the firm's device solutions division, was present at the session instead of Lee Jae-yong, the de facto head of the group who is in prison. 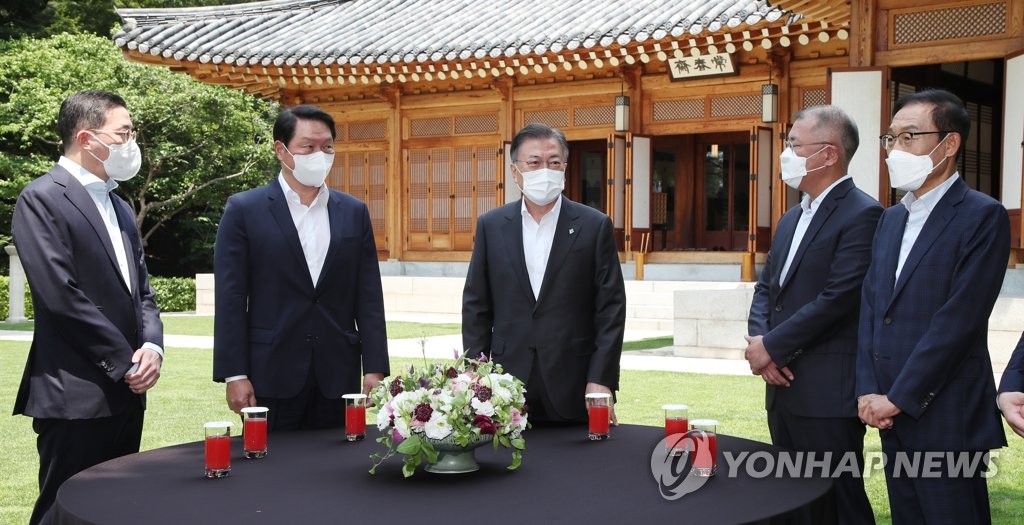 Moon took note of the conglomerates' announcement of plans to make their largest-scale investments ever in the United States, which was made on the occasion of his trip to the U.S. in late May. Top executives of the four business groups accompanied Moon on the visit.

"The results of the South Korea-U.S. summit talks were quite good thanks to participation by the four groups in the U.S. trip," Moon said in front of pool reporters just ahead of the luncheon. It was held at the Sangchunjae guesthouse inside the Cheong Wa Dae compound.

In particular, he stressed, it was very meaningful that the allies have agreed to expand bilateral economic cooperation to cover the initiative related to global supply chains in such high-tech sectors as semiconductors, batteries and electric vehicles.

"I think that it is quite meaningful for the alliance to have developed comprehensively like this," the president told the business leaders. "It was also very significant that the U.S. has chosen South Korea as the most necessary partner (regarding the supply chains)."

He then dismissed worries that increased investments by local businesses in the U.S. may lead to a reduction in jobs here.

It would instead create more jobs and opportunities in South Korea because small and medium-sized contract firms would follow in the footsteps of those conglomerates, and the exports of parts, materials and equipment would grow significantly, he added.

It was not immediately confirmed whether the politically sensitive issue of whether Moon should grant a special presidential pardon to the Samsung chief was raised in the meeting.