SEOUL, June 2 (Yonhap) -- South Korean movie theaters said Wednesday that they have started a program to give price discounts to vaccinated people for this month as part of marketing strategies to fill virus-hit empty cinemas.

Under the one-month campaign starting Tuesday, those who have received at least one shot of COVID-19 vaccines can buy two tickets at 5,000 won (US$4.50) or 6,000 won each at three major multiplex chains, CJ CGV, Lotte Cinema and Megabox.

A ticket for a weekday movie screening costs around 12,000 won.

They can get the price cut after presenting their vaccination certificate at the ticket booth.

The cinema chain association, whose members include three major multiplexes, said the campaign is aimed at encouraging more people to get inoculated and helping them spend their free time safely at movie theaters. 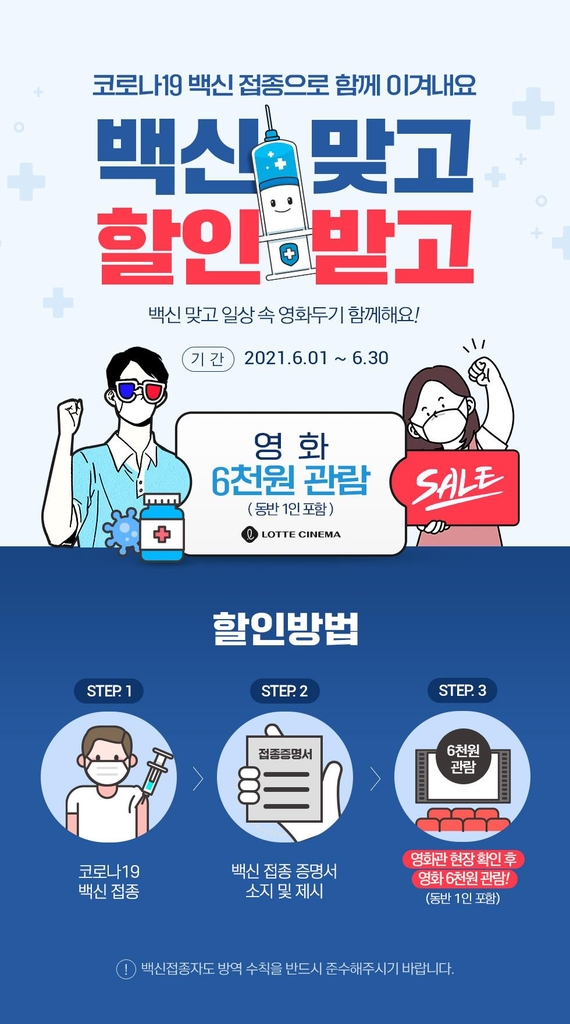 At the same time, the government is planning to resume a nationwide program to issue 6,000 won discount coupons for movie tickets in the second half.

The discount program led by the Korean Film Council has been suspended for months since the massive surge in novel coronavirus cases in late November last year.

The South Korean film industry has been in a slump for more than a year due to the fallout from the COVID-19 pandemic.

But the local box office recently showed some signs of recovery led by a bullish run by "F9," the latest chapter in the "Fast and Furious" series, and Disney's live action film "Cruella."

The horror film "The Conjuring: The Devil Made Me Do It," the Disney fantasy animation "Luca" and the Korean thriller "Hard Hit" are in the upcoming lineup for this month.

Meanwhile, a total of 6.35 million people in South Korea received their first shots of COVID-19 vaccines as of Wednesday since the vaccine rollout on Feb. 26, taking up 12.4 percent of the total population.

Local movie theaters to give discount to vaccinated people

Local movie theaters to give discount to vaccinated people