Imports of Japanese materials and parts came to US$9.69 billion in the January-April period, accounting for 15 percent of South Korea's overall imports of those goods, according to the data from the industry and trade ministry.

The proportion was down 1.1 percentage points from the same period a year earlier and the lowest since data tracking began in 2001.

In contrast, imports from Taiwan rose to 9.3 percent of the total from 8.3 percent over the cited period, with those from China also climbing to 30.1 percent from 29.1 percent. 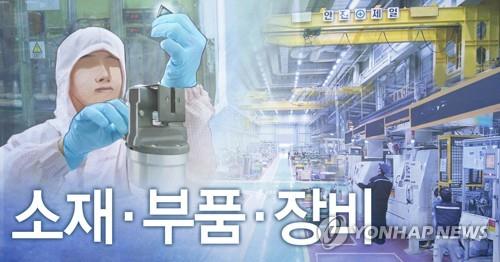 The drop in South Korea's dependency on Japanese imports came after Tokyo implemented export controls, which prompted Seoul and local firms to ramp up efforts to nurture the materials and parts industry.

In July 2019, Japan imposed export controls on chemicals vital to the South Korean chip industry in apparent retaliation against a Seoul court's ruling from 2018 that ordered Japanese firms to compensate victims of their wartime forced labor.

Despite the declining dependency, South Korea's deficit with Japan in the trade of materials and parts widened this year from a year earlier.

In the four-month period, Asia's fourth-largest economy posted a trade deficit of $5.39 billion with Japan in terms of the materials and parts trade, $709 million larger than a year earlier, according to the data.

South Korea's overall trade deficit with Japan stood at $7.89 billion in the first four months of the year.
(END)